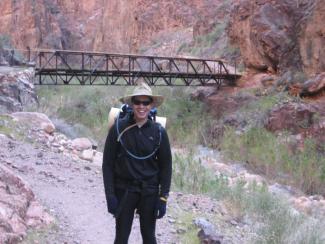 A father’s love never dies, even when his child has succumbed to a fatal childhood disease. Alex Syed paid tribute to his daughter, Aria, by running a marathon through the majestic Grand Canyon in May 2018. Ten years ago, Aria passed away after suffering from congenital disorders of glycosylation, known as CDG—a disease that affects the way proteins and sugar molecules interact in the body.

In honor of his daughter, Syed raised more than $4,300 from 71 donors to fund important research in the laboratory of Hudson Freeze, Ph.D., professor and director of the Human Genetics Program at Sanford Burnham Prebys Medical Discovery Institute (SBP). Freeze is one of the world’s leading experts on CDG.

“Funding is always in short supply, so the donations that Alex raised in the name of Aria will bring us closer to finding a cure for other kids suffering from this devastating disease,” says Freeze. “Aria’s cells are in our lab to support experiments that will help build a database for possible therapies,” he adds.

To prepare for the run, which Syed dubbed “A Grand Canyon Aria,” he rose in the middle of the night to begin his 26-mile run from the South Rim via Bright Angel to North Rim, taking him over the mighty Colorado River.

Running through the Grand Canyon to raise money for Dr. Freeze’s research was Syed’s idea. He knows that rare genetic diseases do not receive a lot of funding from large pharma companies. “The almost-angelic work that Dr. Hud Freeze and his team are performing at SBP is truly unique,” says Syed.

To donate, go to sbpdiscovery.org/CDG.

Watch the video of Alex Syed’s run through the Grand Canyon in memory of Ari: