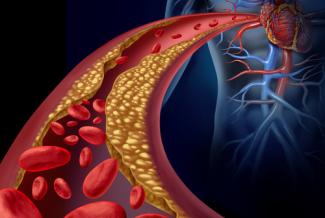 Type 2 diabetes has become a national epidemic, affecting nearly 26 million children and adults in the U.S. and approximately 170 million worldwide. According to the American Diabetes Association, $245 billion in costs are associated with diabetes, and 1 in 5 health-care dollars is spent caring for diabetics. A significant portion of the health costs associated with diabetes are those attributed to complications of the disease—including heart attacks, heart failure, stroke, dementia, chronic kidney disease, and amputations of the lower limbs. These complications emerge partly from hardening of the arteries caused by calcium deposits—a process known as arterial calcification—and are much more common in type 2 diabetics than in non-diabetics.

Dwight Towler, M.D., Ph.D., professor and director of the Cardiovascular Pathobiology Program at Sanford-Burnham, has been actively researching the molecular causes of arterial calcification for more than a decade. Finding a way to prevent cardiovascular calcification could improve the vascular health of type 2 diabetes and prevent many of the associated medical complications.

In Towler’s previous work, he found that the assumption that arterial calcification was a natural, passive process that happens when cells die was incorrect. Instead, he showed that when the metabolism is disturbed—as in diabetes—calcium deposits are made by an active process that happens when key regulatory proteins erroneously trigger bone-formation genes in the arteries. Today, he is focused on those regulatory proteins, coded in the DNA by the Msx genes. Under normal conditions, Msx genes are essential for the formation of bones and teeth in the skull. But, in inflammatory conditions such as those associated with type 2 diabetes, the genes trigger the formation of calcium deposits in the arteries.

In his most recent study published on July 16 in the journal Diabetes, in collaboration with Dr. Robert Maxson of the University of Southern California, Towler’s research team examined the impact of Msx genes in mice genetically engineered to develop diabetes when fed high-fat diets. Previously, Towler showed how high-fat diets up-regulated the Msx genes in the aorta and coronary vessels of these mice, and caused calcium deposits via the Wnt paracrine signaling cascade. Now the question was: What would happen if Msx genes were absent in these mice?

“We were pleased to find that down-regulation of the Msx genes did indeed reduce the arterial calcification and vascular stiffness associated with diabetes,” said Towler. Our results are important because currently, there are no drugs to treat cardiovascular calcification. We have now identified four signaling pathways that represent targets for new drugs to intervene and inhibit the process.”

As a board-certified internist, Towler is committed to advancing these research findings to improve patient health and health care. “Our next step is to biochemically and genetically validate these pathways in human vascular disease—and identify drugs that improve vascular structure and function in mice. We are starting with lead compounds already tested in humans for other indications to see if we can repurpose those drugs to minimize the time it takes to get a treatment to the patients that suffer from this devastating complication of diabetes,” added Towler.

Funding for the study was provided by NIH grants HL69229 and HL81138, the Barnes-Jewish Hospital Foundation, and Sanford-Burnham Medical Research Institute.