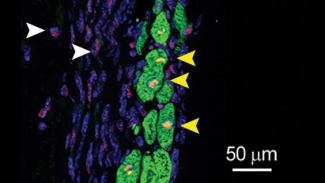 An international team of researchers has identified a protein that helps heart muscle cells regenerate after a heart attack. Researchers also showed that a patch loaded with the protein and placed inside the heart improved cardiac function and survival rates after a heart attack in mice and pigs.

Animal hearts regained close to normal function within four to eight weeks after treatment with the protein patch. It might be possible to test the patch in human clinical trials as early as 2017.

“We are really excited about the prospect of bringing this technology to the clinic,” said Mark Mercola, Ph.D., professor in the Development, Aging, and Regeneration Program at SBP, and professor of Bioengineering at UC San Diego. “It’s commercially viable, clinically attractive and you don’t need immunosuppressive drugs.”

High throughput technology in Mercola’s lab was critical in identifying a natural protein, called Follistatin-like 1 (FSTL1), and showing that it can stimulate cultured heart muscle cells to divide. Researchers led by professor Ruiz-Lozano, Ph.D., at Stanford embedded the protein in a patch and applied it to the surface of mouse and pig hearts that had undergone an experimental form of myocardial infarction or “heart attack.” Remarkably, FSTL1 caused heart muscle cells already present within the heart to multiply and re-build the damaged heart and reduce scarring.

Today, most patients survive a heart attack immediately after it happens. But the organ is damaged and scarred, making it harder to pump blood. Sustained pressure causes scarring to spread and ultimately leads to heart failure. Heart failure is a major source of mortality worldwide, and roughly half of heart failure patients die within five to six years. Treatments available today focus primarily on making it easier for the heart to pump blood, and advances have extended patients’ lives. But they can’t help regenerate heart tissue.

The team initially looked to other species for inspiration. Lower vertebrates, such as fish, can regenerate heart muscle, and prior studies in fish suggested that the epicardium, the heart’s outside layer, might produce regenerative compounds. The researchers joined forces to find a solution.

The team started with the epicardial cells themselves, and showed that they stimulated existing heart muscle cells, or cardiomyocytes, to replicate. To find whether a single compound might be responsible, the Mercola lab used mass spectrometry, a sophisticated technology, to find over 300 proteins produced by the cells that could fit the bill. They then screened a number of these candidates using high throughput assays to look for the ones that had the same activity as the cells, and found that only one did the job: Follistatin-like 1 (FSTL1).

The group at Stanford led the development effort for a therapeutic patch made out of collagen, which was cast with FSTL1 at its core. The patch has the elasticity of fetal heart tissue and slowly releases the protein. “It could act like a cell nursery,” Ruiz-Lozano said. “It’s a hospitable environment. Over time, it gets remodeled and becomes vascularized as new muscle cells come in.”

Testing the patch loaded with FSTL1 in a heart attack model in mice and pigs showed that stimulated tissue regeneration even if implanted after the injury. For example, in pigs that had suffered a heart attack, the fraction of blood pumped out of the left ventricle dropped from the normal 50 percent to 30 percent. But function was restored to 40 percent after the patch was surgically placed onto the heart a week after injury and remained stable. The pigs’ heart tissue also scarred considerably less.