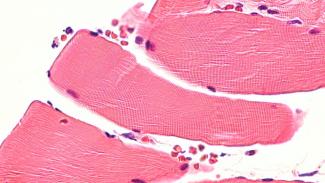 Nuclear pore complexes are large multiprotein channels that act as the sole gateway between the nucleus and cytoplasm. For many years, scientists assumed that the only function of nuclear pore complexes was to regulate the transport of molecules across the nuclear envelope—the double membrane surrounding the eukaryotic cell nucleus. But accumulating evidence is revealing that nuclear pore complexes play key roles in a wide range of cellular functions, contributing to diseases that affect various tissues in the body.

“In this work, we discovered that Nup210 plays a critical role in muscle maintenance and that decreasing its levels leads to muscle degeneration,” D’Angelo says. “These findings suggest that modulating the activity of this nuclear pore complex component could potentially be exploited to stimulate muscle repair and regeneration.”

Previous studies have shown that the protein composition of nuclear pore complexes varies across cell types and tissues. Moreover, mutations affecting specific nucleoporins have been linked to tissue-specific diseases, including blood cancer and other life-threatening conditions affecting major organs such as the brain and heart. But scientists are still trying to understand how variations in the protein makeup of nuclear pore complexes across tissues affect diverse cellular and physiological processes.

Toward that goal, D’Angelo and his team recently showed that a single change in the composition of nuclear pore complexes is sufficient to regulate a cellular process as complicated as cell differentiation. Specifically, they discovered that Nup210 plays a critical role in controlling gene activity and cell fate to promote muscle cell development. However, it has been unclear how Nup210 regulates gene activity, what role this nucleoporin plays in skeletal muscle physiology in living organisms.

D’Angelo and his collaborators set out to address these questions in the new study, using a combination of mouse muscle cells and the zebrafish model organism, which has emerged as an attractive model to study the genetic basis of muscle development and disease. The researchers found that Nup210 recruits another protein called Mef2C to nuclear pore complexes, thereby activating genes that promote skeletal muscle growth and maintenance, muscle fiber maturation, and muscle cell survival. Moreover, depletion of Nup210 in zebrafish resulted in muscle degeneration, further highlighting the important role of this nucleoporin in muscle growth.

These findings are a significant step toward developing much-needed therapies for muscular dystrophies—a group of more than 30 genetic diseases characterized by progressive weakness and degeneration of the skeletal muscles that control movement. Currently, there is no cure or specific treatment to stop or reverse any form of muscular dystrophy. As a result, most patients eventually lose the ability to walk and struggle to carry out the basic tasks of daily living.

“We are currently working on addressing this problem by investigating whether increasing Nup210 levels can stimulate the differentiation of dystrophic muscle progenitor cells and increase muscle repair in models of muscular dystrophy,” D’Angelo says. “These findings could lead to the development of new therapies for the treatment of muscle dystrophies based on modulating nuclear pore complex function.”