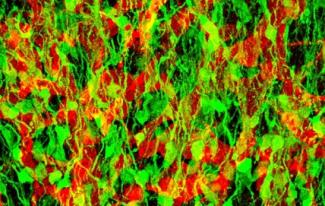 Evan Snyder, M.D., Ph.D., director of the Center for Stem Cells and Regenerative Medicine and a professor in SBP’s Human Genetics Program, was awarded a grant to develop a stem cell treatment for amyotrophic lateral sclerosis (ALS). ALS, also known as Lou Gehrig’s disease, involves degeneration and death of motor neurons (which control voluntary muscles), causing difficulty speaking, swallowing, and eventually breathing. No available treatments can slow the progression of ALS, which affects approximately 20,000 people in the U.S.

As new therapies are urgently needed, the Department of Defense announced a funding program for new therapeutic ideas in ALS in 2015. Snyder received one of eight grants awarded in this competitive program.

This grant will support research on human neural stem cells (hNSCs) as an approach to support the survival and function of existing motor neurons. The Snyder lab is modifying hNSCs so that they can be administered via the bloodstream and home to the spinal cord. This strategy allows the stem cells to become distributed throughout the spinal cord, overcoming a previous limitation. Snyder’s team has already shown that transplanted NSCs improved motor performance, respiratory function, and symptom-free survival in a mouse model of ALS.

hNSCs are already in phase I clinical trials for ALS, which have shown that this therapy is safe. These trials were possible in part because of the Snyder lab’s pioneering work in preclinical models. The current research promises to lead to an improved version of this therapy.