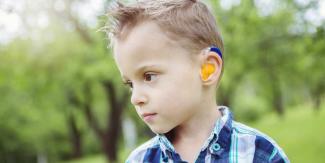 If you’ve heard of hyaluronic acid (HA), it’s probably as an ingredient in cosmetic products meant to help keep skin moisturized. But HA—a polysaccharide, or long chain of sugars—is also a major component of the material that surrounds cells in almost every tissue. It’s particularly important in joints, where it’s part of the fluid that lubricates the cartilage ends of bones as they move against each other, and in the eyes, where it helps maintain the shape of the eyeball.

HA is broken down and replaced much faster than other molecules that make up the structure of tissues—one-third of all the HA in your body (about 15 grams in an average-sized human) is turned over each day. But despite its ubiquity and rapid turnover, how HA is degraded remained a mystery. The only enzymes known to cut it up are located inside cells, but HA is far too large to be taken into a cell whole.

That conundrum has now been untangled. Research from the lab of Yu Yamaguchi, M.D., Ph.D., professor at Sanford Burnham Prebys Medical Discovery Institute (SBP), has identified the enzyme that chops extracellular HA into pieces, a protein called TMEM2 (transmembrane protein 2).

“Until now, the function of TMEM2 was unknown,” says Yamaguchi. “We show that it specifically cleaves HA and none of the other polysaccharides that surround cells.”

The discovery, published in the Journal of Biological Chemistry, could help explain the seemingly unrelated effects of altering or inactivating the TMEM2 gene. Zebrafish lacking TMEM2 die as embryos because their hearts don’t develop properly, and mutations in TMEM2 have been linked to severe inherited deafness. That those presentations are so different is less perplexing now that we know that TMEM2 helps control levels of HA. HA is an important ingredient in cardiac jelly, the gelatinous tissue that fosters proper heart formation, and in the fluid in the inner ear that conducts sound waves.

“Our findings open the door to better understanding of an unknown number of disease states,” Yamaguchi adds. “The fact that eliminating the TMEM2 gene causes mortality suggests that it’s really important, but keeps us from seeing how it supports the function of various tissues later in life. To figure that out, we’re making mice that lack TMEM2 only in certain organs.”