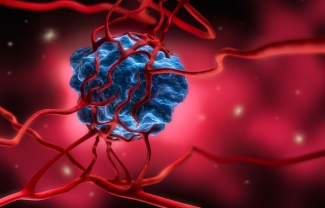 Oxygen is essential to life. When fast-growing tumor cells run out of oxygen, they quickly sprout new blood vessels to keep growing, a process called angiogenesis.

By blocking pancreatic cancer’s oxygen-sensing machinery—the same field of research studied by the winners of the 2019 Nobel Prize in Medicine—Sanford Burnham Prebys scientists have uncovered a new way that tumors turn on angiogenesis in an animal model. The discovery, published in Cancer Research, could lead to a treatment that is given with an anti-angiogenetic medicine, thereby overcoming drug resistance.

Many cancer treatments work by blocking angiogenesis, which rarely occurs in healthy tissues. However, these medicines eventually stop working, and the cancer returns, sometimes in as little as two months. Scientists have been researching why this treatment resistance occurs so it can be stopped.

In this study, the scientists focused on pancreatic cancer, which is notoriously desperate for oxygen and also difficult to treat. Fewer than 10% of people diagnosed with pancreatic cancer are alive five years later.

To see how a pancreatic tumor responds to a disruption in its oxygen supply, the Sanford Burnham Prebys researchers used a mouse model to block an oxygen-sensing protein called HIF1A—which should cripple the tumor’s growth. Instead of dying, however, after about a month the cells multiplied—indicating they had developed a new way to obtain oxygen.

Further work revealed that the cancer cells were clear and swollen with the nutrient glycogen (a characteristic also seen in some ovarian and kidney cancers). In response to the excess glycogen, special immune system cells were summoned to the tumor, resulting in blood vessel formation and tumor survival. Each of these responses represents a new way scientists could stop pancreatic tumors from evolving resistance to treatment.

“Our team’s next step is to test tumor samples from people with pancreatic cancer to confirm this escape mechanism occurs in a clinical setting,” says Powis. “One day, perhaps we can create a second medicine that keeps anti-angiogenic drugs working and helps more people survive pancreatic cancer.”