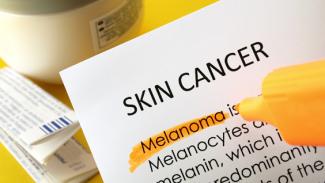 A new drug discovered by scientists at Sanford Burnham Prebys Medical Discovery Institute (SBP) may show promise for treating skin cancers that are resistant or unresponsive to today's leading therapies.

In the United States, 5 million people are treated annually for skin cancer, and 9,000 people die from the deadliest form—melanoma—according to the US Department of Health and Human Services.

The new compound, named SBI-756, targets a specific molecular machine known as the translation initiation complex. These structures are in every cell and play the critical role of translating mRNA into proteins. In cancer cells the complex is impaired, producing extra protein and providing a growth advantage to tumors. SBI-756 causes the translation complex to dissociate, and was shown to inhibit melanoma cell growth in the study, published today in Cancer Research.

“The unique target of SBI-756 makes it especially promising for use in combination therapy,” said Ze’ev Ronai, senior author and scientific director of SBP’s La Jolla campus. “A major issue limiting the effectiveness of current melanoma therapies is that tumors become resistant to treatment. Combining drugs that come at a melanoma from different angles may help overcome the problem of drug resistance.”

About 50% of melanomas are caused by mutations in a specific gene called BRAF. Patients with these tumors are commonly prescribed vemurafenib, a BRAF inhibitor that shrinks tumors. However, many patients experience a relapse within weeks, months, or even years because tumors evolve and become resistant to the drug. A similar phenomenon is seen in mice, where treatment of BRAF melanomas results in an initial response, but 3-4 weeks later the tumors return.

The team found that if SBI-756 is co-administered with vemurafenib, the tumors disappeared and most importantly, they did not reoccur. Even in mice with advanced/late stage BRAF driven cancer, the reappearance of . These data suggests that SBI-756 provides a significant advantage in overcoming tumor resistance.

"The ability of this compound to delay or eliminate the formation of resistant melanomas is very exciting," said Ronai.

In other forms of melanoma, caused by mutations in the genes NRAS and NF1—which are known as unresponsive to BRAF drugs—administering SBI-756 alone significantly the scientists found. The team is now testing whether combining SBI-756 with existing drugs used for treating these types of melanomas can make the tumors disappear.

Drugs that target the translation initiation complex have been intensely pursued in the past few years, not just for melanoma, but for a wide array of cancers. SBI-756 is considered a first-in-class drug because it is the first successful attempt to target a specific part of the complex called eIF4G1.

In fact, SBI-756 is the culmination of seven years of work in Ronai’s group—testing and tweaking the drug’s features to help it bind to the target more readily and to make it easier to formulate. The resulting compound is a significant improvement over the initial version.

“It appears that the dose we need to administer is very low. Even in the experiments where the drug was administered to mice with tumors over a significant period of time, we have not found any toxicity,” Ronai said.

“The finding of SBI-756 is also exciting for the possible treatment of diseases other than cancer, such as neurodegenerative diseases, where the activity of the translation initiation complex is reported to be higher,” said professor Nahum Sonenberg of McGill University, a world renowned leader in the field of protein translation.

“We hope that we're going to come up with the next generation of the compound that can go into clinical trials—first in melanoma but likely in other tumors,” Ronai said.