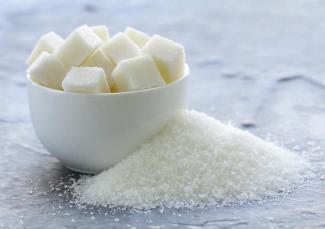 Regularly consuming artificial sweeteners increases the chance that you will gain weight and develop type 2 diabetes, but it’s not clear yet whether saccharin, aspartame, and other non-caloric sweeteners directly alter metabolism. If they do, figuring out the molecular basis for their effects could lead to new ways to treat obesity and prevent metabolic problems. Toward that goal, the lab of George Kyriazis, Ph.D., recently did experiments in people that measured the immediate consequences of a substance that acts on the same receptors as sweeteners.

The receptors, called sweet taste receptors, are located on our tongues and are responsible for our enjoyment of tasting sugars and artificial sweeteners. But they’re also found in our gastrointestinal tract, which may help regulate metabolism.

To figure out whether sweet taste receptors in the gut directly affect blood sugar control in humans, Kyriazis’s team had ten non-obese volunteers drink either water or water containing lactisole, a food additive that inhibits sweet taste receptors—the opposite effect from that of artificial sweeteners. Surprisingly, lactisole increased the amount of insulin released when the participants drank a glucose solution a few minutes later.

“This is the first evidence that sweet taste receptors could regulate acute insulin responses in humans during the ingestion of glucose,” says Kyriazis, senior author of the study, published in the American Journal of Clinical Nutrition. “While these results don’t directly tell us how artificial sweeteners or sweet taste receptors contribute to obesity and diabetes, we’re currently exploring their long-term effects using mice.”

“Surprisingly, in the human study, lactisole had no effect on incretins,” Kyriazis comments. “That means sweet taste receptors are affecting the pancreas by some other means. We hope to gain further insight on that using animal models. We’re also having healthy subjects consume lactisole for a few weeks to understand the long-term metabolic impactof targeting sweet taste receptors.”

Kyriazis has been awarded the Polak Young Investigator Award by the Association for Chemoreception Sciences in honor of this pioneering research.