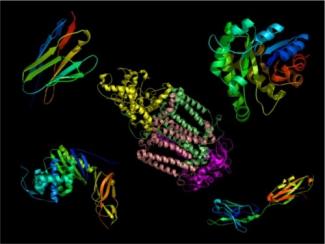 Throughout our lives, our bodies must maintain a continual balance of cell growth and cell death—especially to eliminate unwanted cells, like cancer cells.  This balance is coordinated by some proteins that promote cell death and others that support cell survival.

Francesca Marassi, Ph.D., professor at SBP’s NCI-designated Cancer Center, studies one of the proteins involved in this balance, Bcl-xL. Bcl-xL is a protein that promotes survival by binding to and sequestering proteins that promote cell death. This function makes Bcl-xL an intriguing focus for drug development.

“Studying Bcl-xL is important because this protein is expressed at abnormally high levels in many types of cancer,” Marassi explains. “Blocking its function causes cancer cells to die, making Bcl-xL an important cancer drug target. Understanding its structure is key to designing effective drugs to block its activity.”

Current understanding of Bcl-xL’s structure describes a protein with three regions – a core that interacts with proteins involved in cell death, a flexible region lacking defined structure (IDR) with an unknown function, and a membrane-anchoring region that attaches the protein to specific sites within the cell. Marassi’s group is the first to be able to produce complete Bcl-xL molecules containing all three domains, an essential advance in the field previously described in the Journal of Molecular Biology.

“Most studies have used shortened versions of Bcl-xL that only contain the core region, but our method creates a molecule that better resembles the actual form in our cells,” Marassi says. “Using our version allows us to ask questions about how the protein’s different regions interact with each other. This will help us understand how the entire protein works together to block cell death, and may provide new sites to target in drug discovery.”

In collaboration with Richard Kriwacki, Ph.D. at St. Jude Children’s Research Hospital, Marassi’s proteins were used to show that Bcl-xL’s IDR controls the core’s ability to interact with its binding partners. By combining their areas of expertise, the two labs demonstrated that changes to the chemistry of the IDR altered the structure of the core region of the Bcl-xL protein. When they altered the IDR to match changes that occur in normal cells at the start of the cell death process, the core region changed to a closed structure. This change hid Bcl-xL’s binding site, preventing it from blocking the activity of cell death-promoting proteins.

“We are next interested in determining if Bcl-xL’s method of self-regulation also occurs when it is embedded in a cell membrane, where Bcl-xL would be found in a normal cell,” Marassi says. “If we can show that the same interaction between the IDR and core occurs at the membrane, it is likely that this control occurs naturally in cells. This opens up the possibility that drugs to block Bcl-xL’s anti-death function could target the more accessible IDR region, rather than the protected core region.”