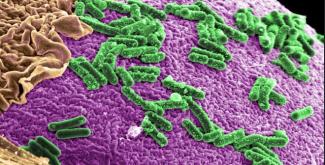 Malnutrition in infants and young children can have major life-long impacts—deficiencies in important nutrients stunt growth and impair development. Although aid organizations have developed fortified meals to make up for these deficiencies, they don’t completely compensate for the lack of nutrition. Now scientists know why malnourished children might not benefit as much as they should from added nutrients in their diet.

New research led by Jeffrey Gordon, M.D., of Washington University in St. Louis, shows that it has to do with the gut microbiome—the complex community of microbes that colonize the intestine and have profound effects on human health. By comparing the microorganisms that live in the gut of malnourished to those in healthy children, they found that the microbiomes of malnourished children were immature, more similar in their microbial composition to microbiomes of infants. A timely maturation of the microbiome at the earliest stages of human life (while shifting from breast milk to solid foods) appears to be as essential for children’s health and well-being as timely development of other body parts.

The study, published in Science and co-authored by the research team of Andrei Osterman, Ph.D., professor in SBP’s Bioinformatics and Structural Biology Program, transplanted the gut microbiota from malnourished and healthy children from Malawi into germ-free mice and fed them a typical Malawian diet. The mice that received microbes from malnourished children grew less and had weaker bones than the ones who got healthy-kid microbes.

The research team was able to overcome the growth-blocking effects of an immature microbiome by either co-housing those mice with mice given microbes from healthy kids, or transplanting certain bacterial species that they found were capable of invading the immature microbiome and shift the entire microbial population toward the mature healthy composition.

“This study suggests that if we can populate the gut of malnourished children with the right microorganisms, we have a chance at getting them on the right track for growth and development,” said Osterman. “Our bioinformatics team is focused on genomics-based mapping of metabolic pathways of the identified growth-restoring microbes with the goal of developing probiotic and prebiotic treatments that will improve nutritional health.”

Other SBP contributors to this research include Dmitry Rodionov, Ph.D., and Semen Leyn, Ph.D.