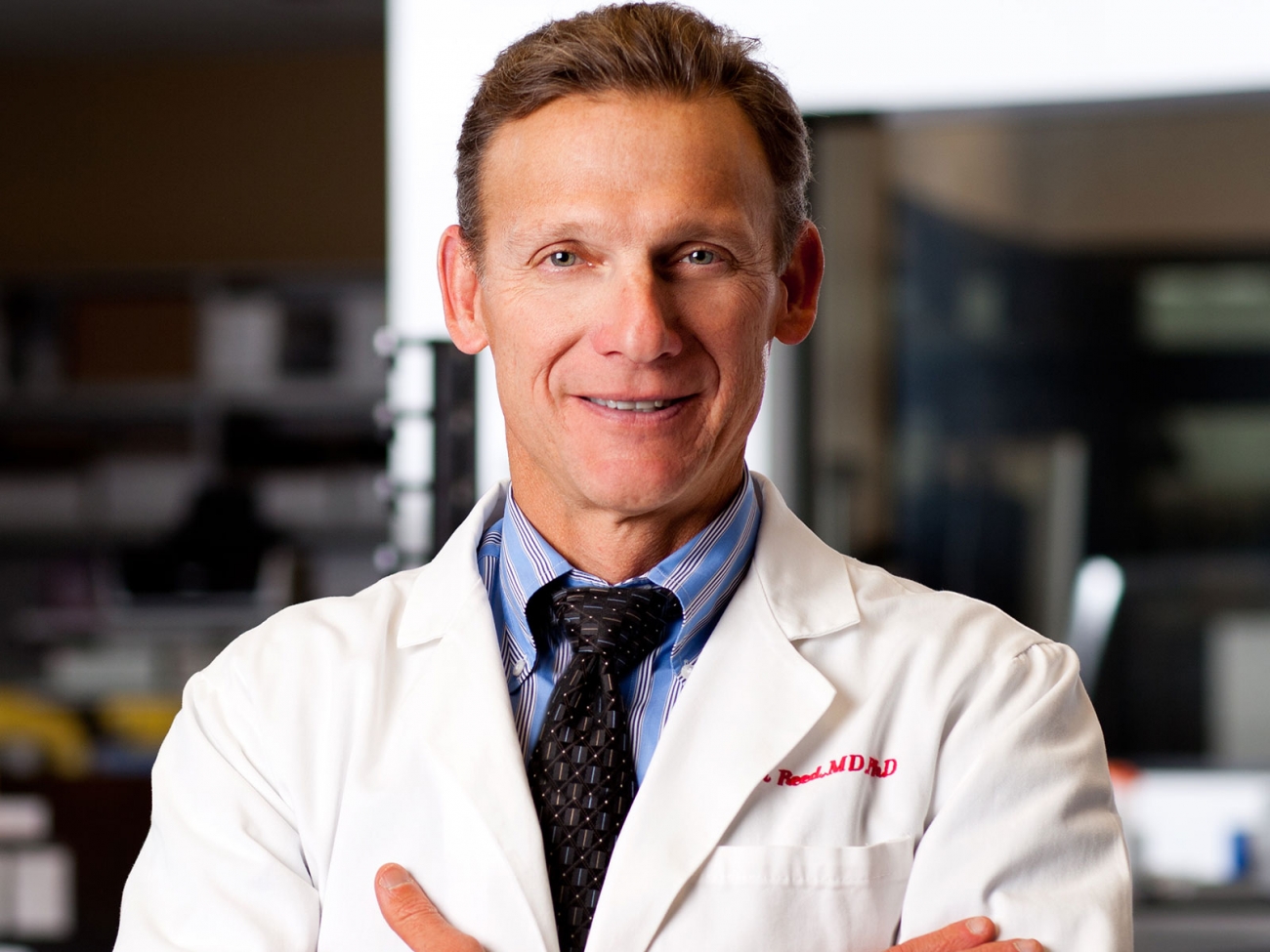 Dr. Reed’s laboratory studies the fundamental mechanisms that regulate cell lifespan. His team analyzes how those mechanisms go awry in disease states. They are interested in how the defective regulation of programmed cell death results in diseases such as Alzheimer’s (when too much cell death occurs) and cancer (when too little cell death takes place). The Reed laboratory also studies the intersection of cell death with infections and inflammatory diseases.

Cell death is a natural part of life. Every day in the human body, 50-70 billion cells die, making room for the equivalent number of new cells produced daily through cell division. So massive is the flux of cell birth and death in our bodies, that in the course of single year, each of us will produce and in parallel eradicate a mass of cells equal to our entire body weight.

Our cells are endowed with a suicide mechanism that instructs cells when it is time to die. Unfortunately, defects in the regulation of this cell suicide program can occur, leading to diseases characterized by either too much cell death [cell loss] (stroke; heart failure; Alzheimer’s; Parkinson’s; AIDS) or too little cell death [cell accumulation] (cancer; auto-immunity). In fact, it is estimated that over half of the major medical illnesses for which effective treatments or preventions are currently lacking can be attributed directly or indirectly to defective regulation of programmed cell death mechanisms.

Our laboratory studies fundamental mechanisms of cell life-span regulation, and analyzes how those mechanisms go awry in disease states. We use tools of genomics, proteomics, metabolomics, chemical biology, and bioinformatics to discover genes involved in the causation or suppression of cell death. Characterization of the molecular mechanisms by which the proteins encoded by those genes control cell life and death then provides insights that set the stage for drug discovery. Advances from our laboratory have thus far resulted in a new candidate therapies for cancer, which are in clinical trials, and numerous drug-discovery programs at earlier stages of development for cancer, stroke, inflammation, and auto-immunity. Discoveries from our laboratory have also revealed potential new diagnostic tests that can predict whether cancer patients will or will not relapse after receiving therapy, thus providing much need information in planning optimal medical management.

Defects in the regulation of apoptosis (programmed cell death) make important contributions to the pathogenesis or severity of many diseases, including cancer, autoimmunity, inflammation, neurodegeneration, and ischemic diseases (heart attack; stroke). Indeed, it is estimated that over half of the major medical illnesses for which effective treatments or preventions are currently lacking can be attributed directly or indirectly to defective regulation of programmed cell death mechanisms.

Apoptosis is caused by activation of intracellular proteases, known as "caspases," which are responsible directly or indirectly for the morphological and biochemical events that characterize the apoptotic cell. Numerous proteins that regulate these cell death proteases have been discovered, including proteins belonging to the Bcl-2, IAP, CARD, Death Domain (DD), Death Effector Domain (DED) families. These caspase-regulating proteins provide mechanisms for linking environmental stimuli to cell death responses (e.g., DNA damage, microtubule disruption; cytokine stimulation) or to maintenance of cell survival (e.g., growth factors; cell adhesion receptors; oncoproteins). Knowledge of the molecular details of apoptosis regulation and the three-dimensional structures of apoptosis proteins have revealed new strategies for identifying small-molecule drugs that may one day yield more effective treatments for several diseases. Apoptosis-regulating genes are also beginning to find utility as targets for antisense oligonucleotides or for use in gene therapy applications. Moreover, knowledge about the signal transduction pathways that control the expression of apoptosis gene or that modulate the functions of apoptosis-proteins can be exploited for altering the balance of pro- and anti-apoptotic gene expression and function, using protein kinase inhibitors, regulators of steroid/retinoid-family transcription factors, and other approaches.

Our laboratory studies fundamental mechanisms of apoptotic and non-apoptotic cell death regulation, and analyzes how those mechanisms go awry in disease states. The experimental approaches employed include genomics, proteomics, bioinformatics, structural biology, and chemistry. Some of the discoveries made by the laboratory include (a) establishing the role of Bcl-2 in cancer chemoresistance and use of antisense methods to reduce Bcl-2 expression for sensitizing tumor cells to anti-cancer drugs (a concept tested in clinical trials); (b) demonstration of a critical role for mitochondria in apoptosis mechanisms using a cell-free system; (c) discovery that p53 induces transcription of death-gene Bax, representing the first p53–inducible pro-apoptotic gene; (d) discovery of the mechanism of IAP-family proteins, as endogenous suppressors of Caspase-family proteases; (e) discovery of BAG-family proteins and their role in cellular stress resistance; and (f) development of prognostic biomarkers that predict clinical outcome in patients with cancer.

Dr. Reed has been engaged in research on immunity, inflammation and infectious diseases for nearly 25 years. He obtained his doctoral degree in Immunology in 1986, initially studying signaling mechanisms of lymphokine receptors, then progressing to investigations of cytopathic mechanisms of Human Immunodeficiency Virus (HIV) and other topics in immunobiology. Dr. Reed’s current interests focus on innate immunity, including studies of NLR-family proteins (intracellular analogs of the Toll-Like Receptors [TLRs], PYRIN domain (PYD)-containing proteins, and the role of TRAF-family adapter proteins in signaling by members of the Tumor Necrosis Factor (TNF) Receptor family. Dr. Reed is the co-discoverer of several NLR-family proteins, several PYD-containing proteins, TRAF3, and several proteins involved in regulation of pro-inflammatory Caspase-family proteases and NF-κB. The Reed laboratory is also engaged in research on pathogens, with a focus on virulence factors encoded in the genomes of bacterial and viruses that impinge on signaling transduction pathways regulating inflammatory Caspases, NF-κB, and apoptosis in infected host cells. Translational applications of the basic discovery research conducted in the Reed laboratory include high throughput screens for novel immunoadjuvants that stimulate NLR-family proteins, and chemical inhibitors of NLRs and TRAF-associated proteins with potential utility for treatment of inflammatory and autoimmune diseases, sepsis, and other conditions.

Dr. Reed is one of the world’s leading biomedical researchers. He has authored more than 850 medical research publications. The Institute for Scientific Information recognized Dr. Reed as the world’s most highly cited scientist from 1995 to 2005 in the fields of cell biology and general biomedicine. At the same time, Thomson Scientific named him “Doctor of the Decade.” Dr. Reed is the recipient of over one-hundred competitive research grants, an inventor on more than 90 patents, and the founder or co-founder of several biotechnology companies. He has led various national research initiatives, has served on numerous editorial and advisory boards, and has served as a director of several biopharmaceutical companies. In 2011, he was elected fellow of the American Association for the Advancement of Science. 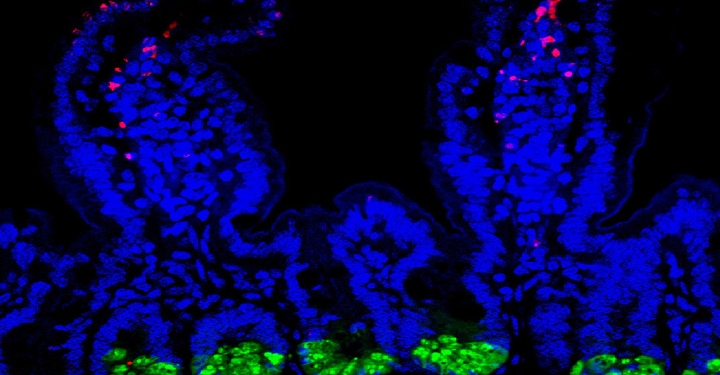