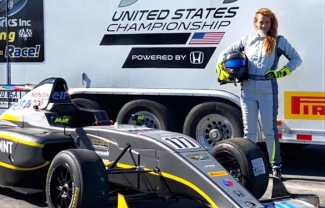 Angela Durazo was a rising star triathlete—racking up age-group wins and corporate sponsorships. Then a diagnosis with rheumatoid arthritis, an autoimmune disorder caused by the immune system attacking healthy tissue, turned her life upside down. Here, she shares her story—including her new journey as a race car driver—and explains why research taking place at Institutes such as Sanford Burnham Prebys is critical to developing medicines that could help her and the 350 million people worldwide who live with the condition.

I never thought of myself as an athlete. I was a cheerleader in high school and then participated in basketball for fun, but I wasn’t invested in the sports. Then some years and trials and tribulations later, seeking to find strength within myself, I accepted an invitation to cheer on a friend and I witnessed a triathlon.

Instantly something spoke to me. The grit, determination, discipline. I was immediately enamored. I needed to do one, but I didn’t know if I could do it. All I knew was I had to try. And so I did. And it was in triathlon, where I truly found myself. Until a diagnosis rocked my world.

Before I was diagnosed—a journey in itself—I’d never heard of rheumatoid arthritis (RA). No one in my family had it. No one in my life had it. However, I would soon come to find what living with this disease meant. I wouldn’t wish it on my worst enemy.

First, I noticed stiffness in my hands when I woke up. I thought I might have slept on them wrong. But it kept happening night after night after night. Then it started affecting my workouts. During my runs, I started feeling like I had sandbags strapped around my legs. Unspeakable, unrelenting pain in my arm started. It felt—and still feels during a flare up—like someone is scraping my bone with a hot knife.

Unable to keep up with training due to the pain and fatigue, I retired from triathlon after seven years. Little did I know the journey that would unfold next—taking me through dozens of doctors, two more career changes (I had a brief endeavor in acting in which I won a Best Actress Award for lead actress in an International feature film) and ultimately leading me to my life’s passion: race car driving.

My experience continues to teach me so much. Now, nearly ten years after my diagnosis, I feel like I’ve finally crawled my way out of hell. To a healthy person, that may sound like an exaggeration. But to anyone who struggles with RA or any chronic diseases, they will know exactly what I mean.

Here are five lessons I have learned as a person reclaiming my life despite living with RA:

Trust yourself. I knew in my heart that something was deeply wrong. However, as a young, seemingly healthy athlete, doctors thought I was simply overtraining. One even floated the idea that I was a hypochondriac (I won’t repeat what I told that doctor.) Finally, after a year and a half of doctor visits, I stumbled across the term “rheumatoid arthritis” on the Internet. I convinced my doctor to test for RA and I finally had my answer. It couldn’t come soon enough: At this point my hands had begun to puff and distend (ulnar deviation).

RA is a disability. When I started competing in paratriathlons, created for people with physical disability, some people questioned if I was really disabled. What these individuals didn’t understand is that—even though invisible from the outside—RA caused permanent damage to my mobility. In addition to the arthritis, it eroded my tendons and bursas (fluid-filled sacs that cushion the bone). Even when medicated, I couldn’t rely on my body. One day you can be fine and the next day you aren’t. One day I could run like a gazelle and the next day I feel like I have sandbags on my legs. My coach and those closest to me saw these effects firsthand. In fact, arthritis is a leading cause of work disability in the U.S., according to the Centers for Disease Control and Prevention (CDC).

Your disease does not define you. I still get chills when I think about the moment that I sat in a Formula race car for the first time. This was eight years after my diagnosis. I felt like I had found my spirit that had been missing since my retirement from triathlon. Race car driving is tough on my hands—Formula cars do not have power steering, amplified by G-forces generated by driving more than 160 miles per hour. I have to work twice as hard to keep my strength up. But frankly, I would work three times as hard if needed. I am not letting RA prevent me from pursuing my passion.

Develop healthy coping skills. Between doctors saying that you won’t walk again and often having to prove your illness, paying attention to mental health is incredibly important for people with RA or any chronic disease. I struggled deeply with depression—and at one point alcohol—and I know many others who also struggle with unhealthy coping mechanisms. Find your support group. Go to therapy. I went to intensive trauma therapy for well over a year to accept the loss of my old body and learn how to embrace this new body with RA. One piece of advice that my trauma specialist told me which transcends any health condition: “RA has already taken so much from you, do not let it take anymore. Turn your pain into power and fight.”

When medicines fail, research is hope. New drugs such as biologics are wonderful. I was incredibly hopeful when I first learned about them. But they only work for one-third of patients. For the other two-thirds of the RA population, we are left figuring it out on our own. And there is so much we don’t know—from what triggers the immune system’s attack to why certain people respond to treatments and others don’t. Get engaged in your research foundations. Attend events. Join Facebook groups. And don’t be afraid to ask questions. YOU are your biggest advocate.

I took this year off racing to heal my body with an experimental treatment, which is working. Now, I’m recalibrating and looking forward to next year’s adventure—IndyCar development—and taking some podiums!

I believe whole heartedly that one-day we will have a cure for RA. Until then, I hope that others with RA know they aren’t alone, and that as long as autoimmune research advances at Institutes such as Sanford Burnham Prebys, we have hope for the future.

Read more about Angela Durazo at Today.com or watch her share her story.