A new approach to restore insulin production in diabetes 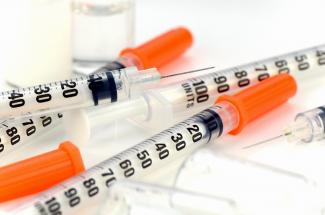 If you have diabetes, there is a strong chance you are either on insulin therapy now, or will be in the future. This holds true for people with Type 1 and Type 2 diabetes; both types lead to elevated blood glucose levels.

Insulin therapy maintains blood glucose at healthy levels to prevent the complications that come with diabetes, such as vision problems, kidney disease, neuropathy, heart disease—and the list goes on.

Insulin is usually administered under the skin using a syringe, insulin pen or insulin pump. But scientists are working to change that.

Fred Levine, M.D., Ph.D., a scientist at SBP, has been working on methods to restore pancreatic beta cells—the cells that live in pancreatic islets and store and secrete insulin.

Levine’s initial work, published in two papers in Stem Cells and Cell Death and Disease, began with an observation that injuring the pancreas of diabetic mice causes alpha cells to convert to convert to insulin-producing beta cells. Alpha cells are also located in pancreatic islets but don’t normally produce insulin.

“There was a signal coming from the injured pancreas driving the conversion of alpha cells to beta cells—a process known as transdifferentiation—and we wanted to know what that signal was,” says Levine.

Levine’s next study found that the activation of PAR2, a receptor on alpha cells, was driving the transition to insulin-producing beta cells. That research was published in a later paper Cell Death and Disease.

“This was a good step toward understanding how to restore beta cells, and there are good drug candidates that can activate PAR2, so it could work in humans,” says Levine. “But there was still hurdle. The transdifferentiation process only occurs in the setting of profound beta cell deficiency—there had to be practically zero functional beta cells for alpha cells to convert.”

Most people with Type 2 diabetes and a smaller percentage with Type 1 have some, but not enough, functional beta cells. For these patients, activating PAR2 alone wouldn’t be a sufficient to treat diabetes. Levine’s group hypothesized that there must be an inhibitory signal coming from beta cells preventing the process.

In the latest study, published in Islets, Levine’s research team found that insulin is the inhibitory signal that prevents transdifferentiation.

“It makes sense that insulin inhibits transdifferentiation, because why would your body generate beta cells if you already had a significant number of cells producing insulin,” says Levine. “But biology isn’t perfect, hence the need for insulin therapy.”

“We were able to work around these obstacles and generate insulin-producing beta cells by using a combination of drugs, one that activates PAR2 (2fLI), and two that inhibit insulin secretion and action (diazoxide and S961). It’s a two element process—one which is positively acting on alpha cells and the other repressive of beta cells,” explains Levine.

“Our research offers the prospect of a straightforward pharmacological approach to regenerate insulin-producing cells to treat diabetes,” says Levine. “For Type 2 diabetes, we could potentially drive transdifferentiation in vivo by activating PAR2 and inhibiting insulin for a short term. It could result in restoration of long-term beta cell function.

“For Type 1 diabetes, we would still need to address the autoimmune aspect of the disorder, because new beta cells would continue to be attacked by the immune system,” adds Levine. “But as our understanding and ability to rein in the autoimmune system improves, the approach could be a much needed breakthrough for the disease.”