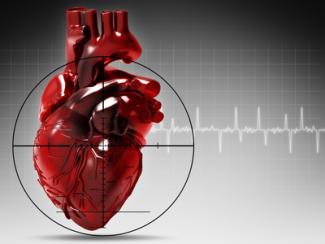 This is a post by our guest writer Janelle Weaver, Ph.D.

Heart failure affects about five million people in the United States, and about half of these individuals die within five years of diagnosis. This condition occurs when the heart can’t pump enough blood to meet the body’s needs, and evidence suggests that abnormalities in energy metabolism play an important role. However, many past studies addressing the underlying molecular mechanisms have focused on severe, late-stage heart failure, potentially missing out on early events that could guide the development of treatment strategies for early disease stages.

Sanford-Burnham researchers have now identified specific metabolic alterations that characterize early-stage heart failure in mice. As reported September 18 in Circulation: Heart Failure, they found that high levels of metabolites involved in breaking down fatty acids for energy serve as robust markers for the transition to heart failure, whereas changes in gene activity, the main focus of most previous studies, are not strongly associated with disease onset.

“Despite recent advances in the prevention and treatment of cardiovascular disease, the prevalence of heart failure continues to grow,” said senior study author Daniel Kelly, M.D., professor and director of the Diabetes and Obesity Research Center and scientific director of our Lake Nona campus. “Our results have important implications for new diagnostic approaches and set the stage for future studies aimed at the identification of new therapeutic targets for preventing or reversing the energy metabolic disturbances that contribute to the development of heart failure.”

To identify these metabolic abnormalities, Kelly and his collaborators at the University of Wisconsin-Madison and Duke University performed transcriptomic and metabolomic analysis of heart-tissue samples taken from well-defined mouse models of heart failure. They found that genes involved in the cellular uptake and breakdown of fatty acids—molecules that serve as an important fuel source for the heart—were less active in mice with early-stage heart failure than in control mice.

But other than the genes involved in the utilization of fatty acids, there were relatively few gene-expression changes affecting other energy metabolic pathways, compared to the more-widespread changes in metabolite levels. Using mass spectrometry, the researchers found a specific metabolite signature that distinguished mice with heart failure from control mice. For example, heart failure was associated with elevated levels of acylcarnitine and acetylcarnitine—molecules that help to break down fatty acids for energy. Moreover, mice with heart failure had high levels of lactate, suggesting that the early-stage failing heart also had problems using glucose as a fuel.

“In striking contrast to many published studies that have largely focused on later-stage heart failure, we found that metabolite levels, rather than gene-regulatory events, may serve as robust predictive biomarkers of the onset of heart failure,” Kelly said.

In response to increased biomechanical stress, the heart can develop thicker muscle tissue in a process called cardiac hypertrophy, which is associated with not only heart failure but also endurance exercise. To examine metabolic differences between the disease-related and healthy forms of cardiac hypertrophy, the researchers compared heart-tissue samples from mice with heart failure to those from mice that underwent an adaptive form of cardiac hypertrophy triggered by a  wheel-running-based exercise regimen for eight weeks. The pattern of metabolite changes was strikingly distinct between the two groups. In mice that underwent endurance exercise training, acylcarnitine and lactate levels were lower than normal, while acetylcarnitine levels did not change.

Despite their distinct metabolite profiles, mice with heart failure and exercise-trained mice both showed relatively few gene-expression changes associated with cardiac hypertrophy. “Collectively, our findings point to a previously underappreciated role of changes in altered levels of metabolites associated with both pathologic and physiological processes affecting the heart, highlighting the need to focus more attention on these molecules in future studies,” Kelly said. This work also underscores the power of metabolomics studies aimed at understanding disease. Notably, Sanford-Burnham's Lake Nona campus has developed a state-of-the-art core facility to conduct metabolomics.

As a member of Sanford-Burnham’s Cardiovascular Pathobiology Program, Kelly is continuing to focus one arm of his research on identifying new pathways to stabilize metabolism in the failing heart. “A long-term goal is to identify new targets and biomarkers for the development of metabolic modulation therapy aimed at the prevention or amelioration of common forms of heart failure,” he said. "We seek to treat the various forms of heart failure in a more precise manner using this approach."

The new findings go a long way toward that goal. “Characterization of the energy metabolic disturbances occurring during the early stages of heart failure is an important first step toward the identification of new therapeutic targets,” he said. “It is important to identify these signatures in the early stages of heart failure, when pharmacologic therapy may have the most impact to change the course of the disease.”

The original publication can be found at: http://circheartfailure.ahajournals.org/content/early/2014/09/18/CIRCHEARTFAILURE.114.001469.abstract.