An “Odd” gene affects aging of the heart 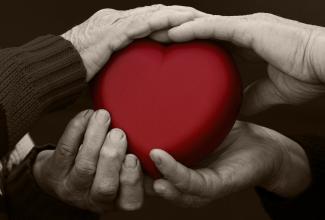 As we get older, our hearts change in ways that make it harder for them to pump blood. They become stiffer, less efficient at generating energy, and more likely to respond to damage with inflammatory chemicals. To help find new ways to slow that decline, researchers in the laboratory of Rolf Bodmer, Ph.D., professor and director of the Development, Aging and Regeneration Program at Sanford Burnham Prebys Medical Discovery Institute (SBP), are looking at how the heart ages at a molecular level.

Bodmer’s team recently discovered a new potential contributor to cardiac aging, a protein called Odd, opening up a novel direction for research on therapies to prolong heart health. In their study, published in the journal Aging Cell, the gene for Odd, which controls the activity of other genes by turning them on or off, was found to be turned up in the hearts of old fruit flies. Bodmer’s lab studies flies because their hearts deteriorate with age in the same ways that human hearts do, but their genetics are much simpler.

“It’s intriguing that Odd is linked to aging because its known function is in early development—it’s crucial for the heart to form properly, and, as we found here, is also important for preventing the heart from deteriorating prematurely,” says Bodmer.

Odd’s involvement in cardiac aging was uncovered by a genome-wide comparison of the genes that are active in the hearts of young and old flies. Odd was one of over 200 genes whose activity was significantly elevated in older flies. Remarkably, further analysis showed that in aging hearts, increasing Odd activity temporarily protects the heart from decline by supporting proper electrical function and heart rate.

“Our findings suggest that increased levels of Odd in older hearts may be a way to compensate for aging-associated loss of function,” comments Bodmer. “In combination with a companion paper showing that another gene-regulating protein, FoxO, helps preserve the adult heart, they support a growing body of evidence that genes that are crucial in development are also important to keep the heart running well into old age.”

Bodmer contributed to the other paper, from the lab of Anthony Cammarato, Ph.D., assistant professor at Johns Hopkins University School of Medicine, and previously a staff scientist in Bodmer’s lab. The paper showed that FoxO helps protect the aging heart by turning on genes that help get rid of unneeded proteins.

“Following up on the findings of both studies could point to ways to keep our hearts working better for longer,” Bodmer adds.