At Pedal the Cause, Team SBP rode 787 miles for cancer research in San Diego 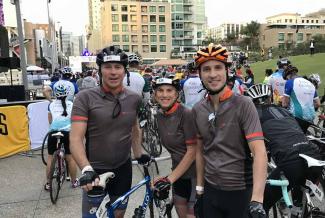 Over a blisteringly hot November weekend, scientists, staff, and supporters of Sanford Burnham Prebys Medical Discovery Institute came together to support the fight against cancer. They participated in the fourth annual Pedal the Cause bike ride and fundraising event that raised over $1.6 million. The money will be used to fund joint collaborative cancer research projects among scientists from SBP, the Salk, Rady Children’s Hospital and Moores Cancer Center at UC San Diego.

Our team’s nine riders biked a collective 787 miles over hilly terrain, raising almost $17,000. Some, like graduate student Marisa Sanchez, were inspired to ride by their personal experience with cancer. “I ride to honor my sister, Alessandra, who we lost to cancer four years ago,” said Sanchez in a video interview. “Research is crucial to advance cancer care—the treatments that are being developed now might have saved her life.”

Team SBP also ran a refueling station, where our volunteers helped the event’s 1,500 riders take a much needed break Sunday morning. In addition to water, snacks, and shade, the SBP station provided a fun disco-themed photo booth, complete with 70s-era tunes, in honor of the Institute’s 40th anniversary.

Local news station CW6 was on site to interview riders and scientists, including SBP’s Cosimo Commisso, Ph.D., assistant professor in the NCI-designated Cancer Center, who emphasized the importance of adequate funding to accelerate progress towards cures.

Commisso was part of a team that was awarded a grant from Pedal the Cause in 2014. That collaboration with Geoffrey Wahl, Ph.D., at the Salk and Andrew Lowy, M.D., at Moores Cancer Center focused on pancreatic cancer, the most deadly common cancer in the U.S., and yielded breakthrough findings that could lead to a new treatment approach. The money raised this year will support similarly innovative, high-impact research that can be rapidly translated into new hope for cancer patients.