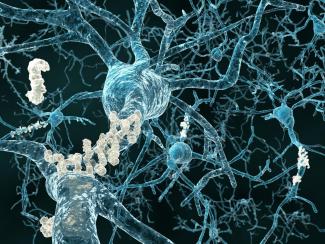 The formation of amyloid-b plaques (aggregates of the amyloid-b protein) in the brain is one of the hallmarks of Alzheimer’s disease, a pathological disorder in which the death of neurons leads to dementia. Although the details involved in this process are still highly debated, many researchers agree that excessive levels of amyloid b protein (Ab for short) lie at the root of the disease. Accordingly, much research is currently focused on determining the cause of Ab build-up.

Huaxi Xu, Ph.D., professor and Jeanne & Gary Herberger Leadership Chair in Neuroscience at SBP, explains that, “Ab is a fragment derived from a larger protein called amyloid precursor protein (APP). The toxic Ab fragment is produced by the action of enzymes that operate inside the cell. In contrast, the action of enzymes that operate outside the cell produce a different set of non-toxic fragments of APP that are part of a normal APP recycling/replenishment system on the neuron cell surface. We wondered if we could minimize the toxic cleavage events that occur inside the cell by promoting the non-pathological, cell surface recycling of APP.”

In a recent report in the Journal of Neuroscience, the flagship journal of Society for Neuroscience, the Xu lab identified candidate molecules that might be important for promoting the cell surface recycling of APP. According to post-doctoral associate Timothy Huang, Ph.D., first author on the paper, “Loss of a recycling protein called SORLA has been observed in Alzheimer’s patients. Our experiments show that SORLA forms a complex with an intracellular navigational protein, SNX27, which can redirect SORLA and its binding target APP to the cell surface. On the surface, APP mostly undergoes non-pathological processing rather than generating Ab.”

Xu emphasizes that future work will need to aim at determining whether these SORLA-SNX27-APP interactions can be exploited in mouse models of Alzheimer’s as a means of preventing or lessening the effects of the disease.