The bright side of free radicals 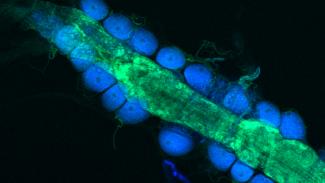 In a new study by Rolf Bodmer, Ph.D., director of the Development, Aging, and Regeneration Program at Sanford-Burnham, and Hui-Ying Lim, Ph.D., assistant member of the Free Radical Biology and Aging Program at the Oklahoma Medical Research Foundation as lead author, researchers report a previously unrecognized role for reactive oxygen species (ROS) in mediating normal heart function. The findings show how under normal physiological conditions, ROS produced in non-muscle heart cells act on nearby muscle cells to maintain normal cardiac function. The results provide vital insight on how ROS direct cell communications, and in addition to the heart, may be important for the function of other organs.

“Until now, scientists knew that ROS in non-muscle heart cells affected nearby muscle cells in conditions of cellular damage and stress,” said Bodmer. “We have shown that ROS have an essential role in normal cardiac health. Understanding the fundamental communication systems in healthy and damaged hearts has important implications for developing protective and therapeutic interventions for cardiac diseases.”

ROS—a reputation of destruction ROS are free radicals that are usually associated with diseases such as cancer, cardiovascular, and neurodegenerative disorders. ROS have atoms with an unpaired electron in their orbit which can send them on a rampage to pair with other molecules, including DNA—causing mutations that contribute to disease. Antioxidants are molecules that soak up the extra electron and remove free radicals, raising the possibility that antioxidant vitamins and supplements might have a protective role in human health.

Opinions on antioxidant supplements are highly polarized. Several large-scale randomized trials of supplements have had inconsistent results and the antioxidant pendulum appears to be swinging from healthy to insignificant, and in some cases even toxic. More reliable data is needed to better define the role of antioxidants in the prevention of cardiovascular and other diseases.

ROS regulate cardiac function by cell-to-cell signaling The new study, published in Cell Reports, illustrates a previously unappreciated role for ROS signaling in the heart and supports the critical concept that optimal levels of ROS are needed in the body to provide protection to the heart and other organs.

The research team used Drosophila melanogaster—the common fruit fly—to decipher the ROS signals that impact the cell function. The Drosophila heart shares many of the same genes, proteins, and structural characteristics with humans, and has been used for decades as a model to understand the human genes that govern healthy development as well as those involved with disease.