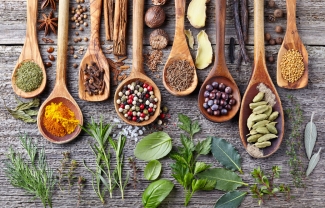 In a recent study published in Evidence-Based Complementary and Alternative Medicine, the researchers examined how four herbs—turmeric, ginger, long pepper and black pepper—change the gut microbiome. These herbs have been used for more than 5,000 years to aid digestion in Ayurvedic healing, India’s traditional system of medicine. The researchers found that the herbs promoted strong shifts in the gut bacteria that are known to regulate metabolism—providing insights that could help us protect our health.

“Scientists have long known that these four herbs facilitate digestion and increase bioabsorption of dietary nutrients. However, the effects on the gut microbiome had not been studied,” says Scott Peterson, Ph.D., senior author of the paper and a professor at Sanford Burnham Prebys. “Our study demonstrates for the first time that these herbs indeed alter the microbiome and produce distinct shifts in microbial populations. This finding is a starting point from which we can begin to decipher how the microbiota may change the gut biochemistry to promote and protect our health.”

Digestive disorders, including Crohn’s disease, celiac disease and irritable bowel syndrome (IBS), are increasingly prevalent in Western populations. More than 60 million people are affected in the United States alone. Treatments for the disorders are limited.

In the study, the scientists collected stool samples from 12 healthy men and women between the ages of 30 and 60 who ate a vegetarian or vegan diet. The samples were grown in medium (food for bacteria) supplemented with turmeric, ginger, black pepper or long pepper. Genomic sequencing was then used to identify how the abundance of species within the community was altered by the herbal supplement.

The scientists found that all of the herb-supplemented samples had unique proportions of bacterial families compared to control cultures—indicating the herbs altered the gut microbiome.

“We are exploring how different herbs produce distinct microbial signatures in the gut,” says Peterson. “It’s clear from this study that each herb works differently. Now the task is to make the connections between the herb profiles and gut health.”

Next, the researchers plan to test the herbs’ therapeutic potential in a controlled human clinical trial. In parallel, they will work in the lab to dissect the herbs’ molecular components and study how these components influence the gut microbiome and promote digestive health.

“By delving deeper into the beneficial molecules present in these herbs and how microbes may alter those constituents, we may be able to enhance their potential benefit and help people suffering from serious digestive disorders,” explains Peterson.

The first author of the study is Christine T. Peterson, Ph.D., of UC San Diego.