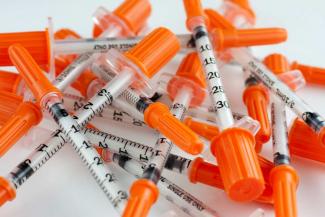 Type 2 diabetes is a massive public health challenge. About eight percent of the world’s adult population has it, and the complications are serious—increased risk of heart attack and stroke, kidney problems, hearing and vision loss and painful nerve damage. Managing blood sugar with diet, routine monitoring and insulin helps prevent these issues, but that takes more time and effort than many patients have.

A new experimental drug developed with the help of scientists at Sanford Burnham Prebys Medical Discovery Institute (SBP) may spell the end of insulin reliance. A study published in Nature Chemical Biology shows that the compound, which can be given as a pill, restores blood sugar control in a mouse model of diet-induced diabetes.

“By targeting an enzyme that controls insulin receptor signaling, we found a way to recover cells’ ability to respond to insulin,” says Anthony Pinkerton, Ph.D., director of medicinal chemistry at SBP’s Conrad Prebys Center for Chemical Genomics and a contributor to the research. “This could lead to a new treatment approach for type 2 diabetes.”

The new investigation, led by Nunzio Bottini, M.D., Ph.D., professor at UC San Diego, found that LMPTP has direct actions on the insulin receptor that reduce its signaling activity, making cells less sensitive to insulin. Turning off the LMPTP gene prevented mice from becoming diabetic when they were fed a high-fat diet, so the research team screened compounds to identify LMPTP inhibitors. Chemical improvements to the best compound gave a potent, orally available drug that improved glucose control in mice with type 2 diabetes.

“This is still a few steps away from clinical trials,” says Robert Liddington, Ph.D., professor at SBP who also collaborated on the study. “No adverse events were noted in mice who received the drug for a month, and the compound is highly selective for LMPTP, but considerably more optimization and testing has to be done to show that it’s safe when taken long-term and is likely to work in humans.”