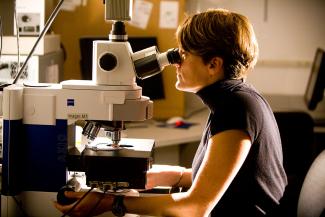 New research from SBP has identified a protein that can extend the natural lifespan of C. elegans, a microscopic roundworm commonly used for research on aging and longevity. The findings, published in Cell Reports, expand what we know about the aging process and may lead to new ways to delay the onset of human age-related diseases such as cancer and neurodegenerative diseases.

“We found that longevity can be extended by increasing the amount of a protein called arginine kinase-1 (ARGK-1),” said Philip McQuary, Ph.D., first author of the study and a former graduate student in the laboratory of Malene Hansen, Ph.D., associate professor in the Development, Aging, and Regeneration Program at SBP. “ARGK-1 maintains ATP availability within cells, and we suspect that increased levels trigger a fuel sensor, regulating energy homeostasis and extending lifespan.”

The research team identified ARGK-1 by comparing protein levels in normal worms to those in worms lacking S6 kinase (S6K), a genetic change that extends worm lifespan by at least 25%. Reduction of S6K proteins also extends lifespan significantly in several other organisms, including laboratory mice, showing that this pathway that controls aging is evolutionarily conserved.

“ARGK-1 caught our attention because levels in S6K mutant worms were more than 30 times higher compared to normal worms,” said McQuary. “When we created normal worms that overexpressed ARGK-1, they also lived significantly longer, meaning that ARGK-1 on its own can extend life.”

ARGK-1 and its mammalian equivalent, creatine kinase, are enzymes that transport energy in the form of phosphoarginine or phosphocreatine to various locations within cells. The research team found that, as in worms, creatine kinase levels are increased in the brains of mice lacking a similar S6K protein.

“Interestingly, supplements with creatine, the substrate for creatine kinase, have been found to improve health and longevity in mice and possibly provide beneficial effects to humans with Parkinson’s disease, suggesting a potential role for these enzymes in aging and age-related diseases,” added McQuary.

“Sorting out which cell functions are protected will be crucial for understanding exactly how ARGK-1 supports longevity in C. elegans, and potentially in other organisms as well.”

“Our main goal in studying aging is not to find ways to extend human lifespan, but to understand the processes by which our cells and tissues become less functional over time. Such insight might allow us to develop better preventive care that improves overall health at advanced ages, or interventions that can slow or perhaps even prevent the progression of diseases associated with aging,” explained Hansen.

“For example, in cancer, some tumors highly activate S6K to feed tumor growth,” said Hansen. “Further work to understand the relationship between creatine kinase and S6K may lead to new avenues to pursue novel drugs for age-related diseases, including cancer.”