Getting to the bottom of potentially fatal heart rhythm defects 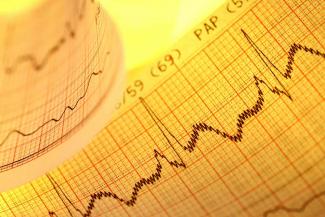 Imagine your otherwise healthy child fainted while playing soccer and was diagnosed with long QT syndrome, a heart rhythm problem that can cause the heart to stop. You’d probably want something major done to keep that from happening, but that may not be necessary. Fewer than 10 percent of long QT syndrome patients ever experience cardiac arrest—figuring out which 10 percent could save lives.

“In patients with long QT syndrome, implanted defibrillators are becoming more widely used, but that’s a major surgery, and the devices aren’t perfect. Cardiologists would prefer to only use them in patients most at risk of dying, but right now, they can only approximate that risk using clinical measures and medical history,” says Karen Ocorr, Ph.D., an assistant professor at SBP. “The research I’m doing now could help doctors make better recommendations in the future.”

In long QT syndrome, which affects about 1 in 5,000 people, the heart is slow to return to its normal electrical state after contracting. The inherited form of the condition is caused by mutations in proteins called ion channels that are responsible for moving ions back out of heart muscle cells after they contract to restore their normal resting charge.

Ocorr is modeling long QT syndrome using fruit flies, which have a similar heart rate to that of humans and analogous ion channels controlling their hearts’ electrical activity. Her lab studies flies that lack the ion channels in which mutations cause long QT—in humans, those ion channels are called KCNQ and hERG.

“We’re looking at how the absence of the fly equivalents of KCNQ or hERG influences electrical activity and heart rhythm in different genetic backgrounds, our goal is to identify cellular interactions and genetic variants that make the effects of long QT worse or better,” explains Ocorr. “As genetic sequencing becomes more common in the clinic, our results could translate to a way of identifying which patients are most at risk of cardiac arrest.”

“We’ve seen that the hearts of flies without these ion channels change structurally,” Ocorr adds. “Understanding why that happens will have implications for preventing sudden cardiac arrest.”

Ocorr was recently awarded an R01 grant from the National Heart, Lung, and Blood Institute (NHLBI). This is the first R01 of her career, which hasn’t been typical—rather than moving directly from postdoctoral training to a faculty position, she first worked in industry and then spent many years teaching and developing internet learning tools at the University of Michigan.

“It’s unusual, but it is possible to start an independent scientific career later in life,” Ocorr says. “I hope my example shows others that they can come back to academia after other pursuits.”