High-throughput screening against a new target for Alzheimer’s drugs 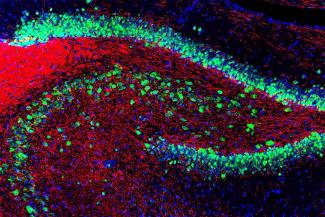 More than 5 million people in the U.S. have Alzheimer’s, and by 2050 that number could rise as high as 16 million. There are currently no treatments that slow the advance of this cruel disease that slowly destroys a person’s memory and reason. Given the overwhelming need for drugs that prevent or limit the brain degeneration caused by Alzheimer’s, scientists are attacking the problem from all angles.

“We looked for inhibitors of a process that isn’t the standard target in drug screening for Alzheimer’s,” says Cosford. “This process—generation of a toxic peptide called APP (amyloid precursor protein) delta C31, or the 31 amino acids at the end of APP—may be especially important at early stages of Alzheimer’s, before neurons start to die.”

APP delta C31, which kills neurons, is made when APP is first cut by an enzyme called gamma secretase to form amyloid beta (the best-studied contributor to brain deterioration in Alzheimer’s) and the remaining portion of APP is then further cut by an intracellular caspase enzyme. Amyloid beta—also toxic—sticks together in clumps that clog up the spaces between brain cells. Most of the drugs that have recently been tested in Alzheimer’s patients are intended to eliminate amyloid beta or prevent it from being created, but so far none have been successful in clinical studies.

Cosford and John’s team found several compounds that inhibit production of APP delta C31. “A few of these compounds block signaling pathways not previously implicated in Alzheimer’s—so this is really a new avenue of research that we are pursuing,” adds Cosford.

Worryingly, generation of APP delta C31 is enhanced by statins, drugs that are widely used to lower blood cholesterol. In fact, statins were used in this study to bump up production of APP delta C31 and make reductions in levels of the peptide easier to detect. However, statins also protect against other damaging processes in Alzheimer’s.

“We speculate that whether statins are good or bad in the context of Alzheimer’s may depend on the stage of the disease,” notes Cosford.

“The next step for us is to test the most promising compounds in animal models of Alzheimer’s,” Cosford adds. “We also plan to use the same approach to screen another library of molecules to identify more potential drugs.”