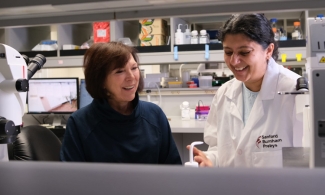 An end goal of all biomedical research is improving outcomes for patients living with illness, but far too often, patient’s voices are not heard in the process. Advocacy programs, such as those offered by the Susan G. Komen Breast Cancer Foundation, help give individuals battling illness a voice in the lab. They also provide critical insights for the researchers doing the science.

To learn more about the role of patient advocates in cancer research, we spoke with Svasti Haricharan, Ph.D., an assistant professor at Sanford Burnham Prebys, and Karen McDonald, a patient advocate working with Haricharan’s team. Karen, a retired computer applications professor, has been working with Svasti’s group since 2020 and has battled three forms of cancer in her life, including her current fight with metastatic breast cancer, which began in 2020.

Today, she is helping in the broader fight against cancer by bringing her unique perspective to the lab, both as a retired scholar and as a woman living with cancer.

What do patient advocates bring to the lab and why are they so important?

Karen: I was a neurology technician many years ago, so I have some science background, but I’m not an expert in the type of science that Svasti and her team do. I look at things from a patient's point of view – not as a scientist or a doctor. I ask questions most patients would ask—but not necessarily questions scientists think about.

One of the things I’ve learned is that I need to have research presentations ahead of time—before a lab meeting—so I can figure out the technical terms. Once I’ve done that, I can bring a real-life perspective to the research—because the scientists aren’t treating patients. Svasti and her team thankfully welcome my input.

Svasti: I agree completely. Having an advocate really helps me and everybody else on the team see things in a completely different way. I think the experience also helps humanize scientists, because it’s easy, especially in biomedical research, to become so focused on the next paper or the next grant that we forget we came into research not to publish papers, but to do amazing science and help people. And having Karen’s perspective does influence what we do.

For example, there was a project on nutraceutical research, or using food as medicine, which a lot of funders don’t want to support because some people think it’s just made up. I was ready to give up on the project because it wasn’t getting support, but Karen brought up the point that patients would love to see this transitioned into the clinic because it’s less toxic with fewer side effects. I went to the top at Sanford Burnham Prebys and actually got funding to develop a drug to mimic the nutraceutical’s effects. I’m not sure this would have happened without Karen’s input—and now we are hopeful for the results.

How far have we come toward giving patients their due voice, and what are some hurdles we need to overcome?

Karen: As times have changed, physicians have stopped being thought of as gods and have started to be more human. They make mistakes. And women in particular have become more active in their healthcare because we were ignored for so long. When women started to speak up, doctors started to listen. I think is why patient advocacy started with breast cancer. Women are communicators and take an integral role in their family’s healthcare. But we still have a long way to go in terms of giving advocates’ voices full consideration.

Svasti: Karen brings up a great point here that women are more used to having to fight to have their voices heard, and that’s why breast cancer helped start the patient advocacy movement through organizations like Susan Komen. It’s beginning to spread beyond breast cancer as more funding agencies are including advocates as grant reviewers, because these are the people who are going to benefit directly from the research.

I think one thing that’s still a problem is not taking an advocate’s input seriously enough. I often see grant applications where the advocate says that a project is very significant, but other reviewers find some nitpicky aspect of the research strategy they don’t like, and the grant doesn’t get funded. There must be a better way for patient advocates’ voices to be included, as opposed to just having them on a review panel to check a box.

What’s something you’d want to tell people who may not know much about cancer research or patient advocacy?

Karen: People need to take it upon themselves to learn more about how research is done. There is such a big divide between scientists and patients, and that’s part of why patients go unheard. Even when you ask your physician about the latest research, they don’t always know.

It’s great that we have the internet now to help. I have a friend with lymphoma and that’s what we spend our time doing – researching the latest science, because we want to make sure we’re in charge of driving our own bus, not letting others have full control.

We need an environment of open-mindedness and willingness to learn. And that goes for physicians as well. We need bridges to connect cancer researchers with the oncologists who are actually going to implement their work and help humanity.

Svasti: That’s such an important idea because just like patient advocates, working with clinicians is sometimes a check box for researchers as well. It’s essential that we have meaningful collaborations—between science and medicine—that can advance research breakthroughs and improve patient outcomes.

I once spoke at a conference that had both patient advocates and researchers, and an advocate came up to me after my talk and asked, “Well what are you doing about this? If your research is real and important, why aren’t you bringing this to clinicians to get this into a clinic to help me?” That really blew my mind, because even though my role is to study cancer in the lab, she was right. Just like we need patient advocates in the lab, scientists need to advocate for research that will help patients the most.

Saying Goodbye to Dawn Dunsmore: A reflection from Josh Baxt 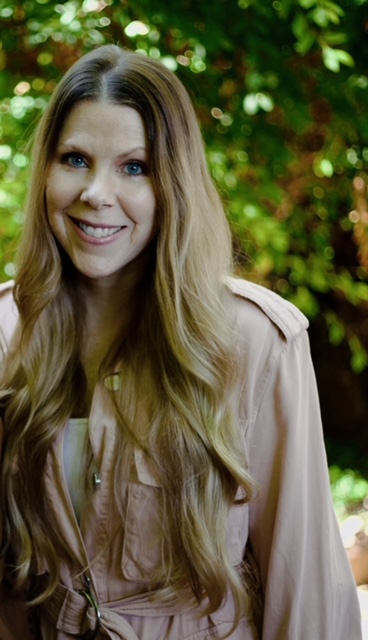 In September 2021, we lost Dawn Dunsmore to breast cancer, a disease she fought for a decade. Dawn was one of Sanford Burnham Prebys’ many committed administrators, most recently in Carl Ware’s lab, before stepping down to pursue treatment. She was a mom, an adventurer, an animal lover, a stubborn fighter and a friend to many, myself included.

Dawn had the bad luck of developing triple-negative breast cancer—one of the deadliest—and  the good luck of being surrounded by people who loved her. She had been working for Carl for about two years when she told him about the lump in her chest. She was quickly diagnosed and treated, but the tumor soon returned.

“Dawn was approaching the end very quickly,” says Bobbie Larraga, Community Relations Manager and one of Dawn’s closest friends. “She was having seizures and difficulty breathing, and we were starting to make end-of-life plans.”

In the background, Carl, a world-renowned immunologist, helped Dawn get into a Moores Cancer Center clinical trial for an immunotherapy (PD-1 inhibitor) that takes the brakes off T cells, allowing them to attack tumors. PD-1 inhibitors work for about a third of patients and, fortunately, Dawn was one of them.

“It’s even crazier because breast cancer is not one that typically responds well to checkpoint inhibitors,” says Carl, who directs the Infectious and Inflammatory Disease Center at Sanford Burnham Prebys. “She was lucky to have that response.”

When they work, immunotherapies are like a little miracle, and Dawn did not take that lightly. She’d been given a reprieve and had things to do.

“She was just crazy for travel,” says Bobbie. “She went with her daughter to Spain. Italy, Indonesia, India, Central America. She went skydiving and was able to really check off things on her bucket list.”

But the cancer never quite went away. There were more treatments and surgeries and at 51, she finally ran out of options. Even in September, when the hospital would not release her, she was planning a trip to Yosemite.

There are so many stories. Bobbie shared how Dawn interviewed her when she first applied at Sanford Burnham Prebys (then the Burnham Institute); how they had an instant connection. Carl described the incredible work they accomplished, and how her support helped him keep it together when his wife was dying of Alzheimer’s.

I don’t usually insert myself into the articles I write – it’s just not appropriate – but Carl asked if I would, and that got me thinking. I joined Sanford Burnham Prebys in 2008, and the first piece I wrote here was a news release for the faculty member Dawn was working for. I was pretty green and Dawn helped me through, the first time of many. She was a generous soul.

Dawn was one of our own and it hurts that she’s gone. Like many at our Institute, she worked long hours to shepherd papers and grants through and helped manage the labs where she worked. She didn’t complain, even when she had the right.

Her experience underscores Sanford Burnham Prebys’ important work. Immunotherapies were first tested in academic labs, much like ours. It also brings home that the statistics we read so often, five-year survival rates or whatever, are representations of real people. The long hours, the stress of so many deadlines, the weekends in the lab, there’s a reason for those. And it’s a good one.