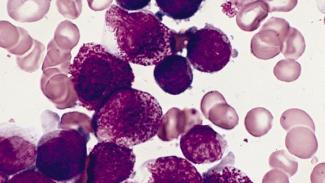 For the first time, Sanford-Burnham researchers have shown how the reversible interactions of the small protein SUMO work to facilitate treatment of acute promyelocytic leukemia (APL). The study, published recently in the journal Science Signaling, explains how the on-off associations of SUMO are required to destroy the APL causing oncoprotein and pave the way for an arsenic-based cure.

“Prior to this study, we knew that SUMO proteins were required for arsenic to work in APL,” said Guy Salvesen, Ph.D., senior author of the paper and professor in the Cell Death and Survival Networks Program at Sanford-Burnham. “Now, we have shown that SUMO needs to conjugate and deconjugate to the promyelocytic leukemia oncoprotein (PML) in a very coordinated manner to promote its destruction.”

The study used a combination of mutational and proteomic analysis techniques to show that the SUMO deconjugating enzyme called sentrin-specific protease 1 (SENP1) is critically necessary to drive ubiquitylation of PML. Ubiquitylation is a process whereby ubiquitin is conjugated to a protein, targeting it for destruction by intracellular enzymes.

“This study provides insights into how the SUMO system selectively uses its variants, SUMO1 and SUMO2, and the crucial role of SENPs, to define the specificity of SUMO signaling,” said Domenico Fasci, Ph.D., lead author of the paper and a postdoctoral fellow in Salvesen’s lab. “Our research highlights how modifying the balance of SUMO protein modifications can alter cell pathways, including cell growth. For this reason, scientists should continue to look more closely at targeting the SUMO pathways as a target for cancer therapy, and other relevant diseases.”

SUMO Proteins SUMO proteins, also known as small ubiquitin-related modifier proteins, covalently attach to other proteins in cells to modify their function or movements within a cell. Mammalian cells express three SUMO variants, SUMO1, SUMO2 and SUMO3. “Sumoylation” is a reversible post-translational modification that has been implicated in many aspects of cell physiology, including chromatin organization, transcription, DNA repair, macromolecular assembly, protein trafficking, and signal transduction.

Acute promyelocytic leukemia APL is a unique malignancy of the bone marrow in which there is a deficiency of mature blood cells in the myeloid line and an excess of immature cells called promyelocytes. APL is caused by a chromosomal translocation between chromosomes 15 and 17 that produces an oncogenic fusion protein that combines the retinoic acid receptor-alpha (RAR-alpha) with the promyelocytic leukemia protein (PML). Normally, PML functions as a tumor suppressor, but in its hybrid form with RAR-alpha, it halts the maturation of myeloid cells and leads to increased proliferation of promyelocytes.

Arsenic: How it works Arsenic, a toxic compound with a reputation as poison frequently used for murder, has been used successfully in the form of arsenic trioxide (ATO) to treat patients with APL. When used as a part of a chemotherapeutic regimen, arsenic trioxide has improved the overall survival of patients. In cancer treatment, arsenic works differently than what happens during poisoning, which occurs when higher levels of the compound choke off a cell’s energy production system.

Listen to the podcast:

This study was performed in collaboration with Genentech Research and Early Development, South San Francisco, Calif.