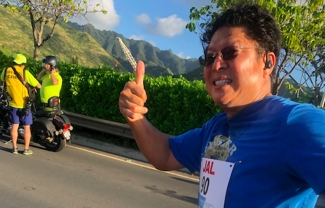 Jerold Chun rounds the 15th mile at the 2015 Honolulu Marathon.

When the Honolulu Marathon went virtual this year, Jerold Chun, M.D., Ph.D., knew that skipping it wasn’t an option. He’s one of only two people who have run the race every year since 1973—the first year of the event—and this would be his 48th marathon to date.

“I ended up completing it on a Saturday morning on a treadmill,” says Chun. “I have to say that was quite a mind-numbing change from running in beautiful Honolulu! But this was the right thing to do to keep both marathoners and their many supporters safe.”

For Chun, who is a fifth-generation Hawaiian, running is more than just a way to stay in shape. The marathon is a tradition for his family, spearheaded by his father until his passing in 2002. Now the event also serves as a way to honor his father’s memory.

When he’s not training for the marathon, Chun can be found in his lab, where he’s working to understand the root cause of Alzheimer’s disease. His team recently discovered a new process in the brain that is linked to Alzheimer’s and might be stopped by existing HIV medicines—which have near-term treatment potential.

“In school we learned that all cells have the same DNA,” explains Chun. “However, our research showed that in the brains of patients, this wasn’t true because of DNA recombination. This process ‘mixed and matched’ a key Alzheimer’s gene into lots of new and different forms, many of which weren’t found in healthy people.”

Chun often uses a run as a way to think through tough problems he encounters in his research. He also sees many parallels between marathon running and the discovery process.

“Most research is more like a marathon than a sprint,” says Chun. “Our recent Alzheimer’s discovery is a great example of that. We encountered many ups and downs and starts and stops over the decades. But in the long run, we may be on the heels of an effective Alzheimer’s treatment.”