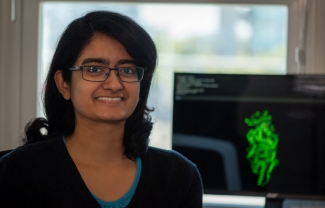 Iyer is studying how proteins “dance,” which could lead to better drugs and a deeper understanding of human health

DNA is often the star of the show when we talk about the body, but proteins are the true front-line workers. Formed by DNA’s instructions, proteins begin as strings of chemical compounds and later fold into a 3D shape that dictates their job in the body. If scientists can solve a protein’s shape—a feat that often takes years or decades—they may be able to create better drugs or better understand disease.

Biologist Mallika Iyer, a graduate student in the Godzik lab at Sanford Burnham Prebys, is harnessing the power of computers to unlock insights into protein structure and movement. We caught up with Iyer as she prepares to take the virtual stage at DASL (the Diversity and Science Lecture Series at UC San Diego) to learn more about her greatest hopes for her research and what makes her tick.

I didn’t, however, imagine myself being a computational scientist until much later. When I was in college, I realized that traditional lab work wasn’t for me. I began learning some basic coding after I graduated and was hooked. That transitioned into computational biology/bioinformatics.

What do you study, and what is your greatest hope for your research?
I study protein structure and flexibility. Proteins are often depicted as having a single structure, but they are actually very flexible and transition between many different conformations as a part of their function—sort of like a well-choreographed dance.

My greatest hope for my research, or this field in general, is that we will someday be able to predict the types of movements a protein undergoes during the course of its function, or “job.” Last year, the field saw a huge advancement in the prediction of protein structure (read more in The New York Times). But “structure” is only half the story. Being able to predict all the different conformations and movements would be incredibly useful for medicine—and very cool!

What do you wish people knew about science?
That being wrong is a huge part of science. Scientists are supposed to understand and explain how the world works. But that is something that involves a lot of trial and error! Being wrong is, in fact, the way we advance our knowledge.

When you aren’t working, where can you be found? Where is your happy place?
Prior to the pandemic, my happy place was actually the climbing gym. I was introduced to indoor rock climbing about two years ago, and I instantly fell in love it with. It’s a great way to exercise both your body and mind, and I have found the climbing community to be really friendly and accepting. What makes my gym even better is that it also has extra space to just hang out, work, read a book, and so on. So, I used to go there a lot!

What is the best career advice you have ever received?
Use every opportunity you can to present your work and network with people. I try to present at as many conferences and symposia as I can, and simultaneously use that as a way to meet and network with others in the field. I’ve found that this allows me to practice answering questions about my work, which in turn enables me to think more critically about it. And it can also lead to new opportunities that further my research and career.

What do you wish people knew about Sanford Burnham Prebys?
That it has a graduate program! I think our program is really unique. Its small size means that each student gets a lot of attention, and we have an Office of Education, Training and International Services (OETIS) that really offers us a lot of great resources to help us shape our careers.

Learn more about the Institute’s Graduate School of Biomedical Sciences.