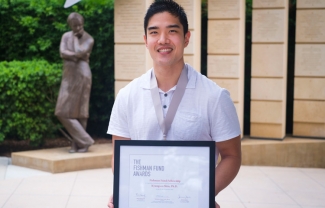 While growing up, Kyungsoo Shin always found himself drawn to science. Learning how the body works was endlessly fascinating to him. But it wasn’t until he was in the middle of his Ph.D. that he became officially hooked on research.

“I was doing a long 16-hour experiment, and around 9 or 10 p.m. I started getting really positive results. I was so excited that I called my supervisors at the time,” recalls Shin. “Even though it was so late, they were just as happy as I was! That was my first introduction to how intoxicating research can be, and the power of a supportive community.”

Today, as a postdoctoral researcher at Sanford Burnham Prebys, Shin is applying his passion for discovery to an area of great need: finding a treatment for dry age-related macular degeneration (AMD). No treatments currently exist for the common condition, which is the main cause of vision loss for people over the age of 60. As a new father, this research became especially meaningful to Shin.

“My son is 3 months old, and just started to smile and laugh,” says Shin. “I couldn’t imagine one day not being able to see him, or my grandchildren. If I had dry AMD, I probably wouldn’t be able to even drive to go see him. I don’t want to imagine that sort of life for anyone.”

Working with a world-renowned scientist

Shin has found a wise mentor in Professor Francesca Marassi, Ph.D., one of the world’s leading experts on nuclear magnetic resonance (NMR) spectroscopy. This technology allows scientists to see the shape of a protein, which enables rational drug design. When the job posting first appeared, Shin was writing his Ph.D. thesis—but his supervisor told him to stop writing and apply to the position immediately. The opportunity to work with Marassi was too important.

“Learning from her has fundamentally changed who I am as a scientist,” says Shin. “Before I used to think in terms of completing projects. Now I ‘follow the science,’ which means let the data lead me to my next step.”

This approach has proved successful: Marassi and Shin recently uncovered a new drug target for dry AMD. Using NMR and other cutting-edge technologies located at the Institute, they deciphered the shape of a protein called vitronectin. Then they showed that the sticky, propeller-shaped protein likely “seeds” the formation of pebble-like structures in the back of the eye that cause vision loss.

Now, with the support of the Fishman Fund Fellowship Award—which provides a salary stipend and $10,000 for career development—Shin can attend scientific conferences that will help him think outside of the box and grow as a scientist. Receiving an award in honor of the Fishmans—who started the Institute after reaching mandatory retirement age—is special to Shin.

“The Fishmans were so devoted to pushing our understanding of human health that they continued their research even when they didn’t have to,” says Shin. “To receive a fellowship that is named after such inspirational and honorable people is truly an honor. I have a great sense of responsibility to advance research that will have a positive impact on humanity, and could one day benefit my son or his children."