Meeting the “man who saved my son’s life” 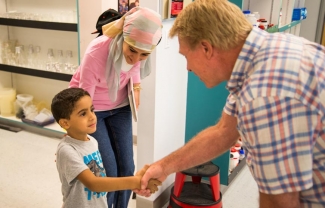 And, indeed, he does.

Baraa and his mother, Sara, didn’t know it at the time, but he was born with a rare change in his DNA that interfered with his body’s ability to attach a sugar to proteins—altering the course of his life.

From birth, Baraa struggled with eating. He dealt with upset stomachs and lethargy, which is unusual for a young child. Sara searched high and low for an answer, but doctor visit after doctor visit, year after year, Baraa remained undiagnosed.

After four years of uncertainty, Sara connected with Dr. Tawhida Yassin Abdel Ghaffar. She suspected a rare condition called congenital disorders of glycosylation (CDG) and ordered a test. Her instincts were correct—Baraa had one form of CDG. More than 130 types of the condition exist.

In addition to working with her doctor, Sara was introduced to a new online community of parents and individuals with CDG. It was through a private Facebook group that she connected with another parent whose child has CDG. He told her, “You have to talk to Hudson Freeze at SBP.”

For more than three decades, Freeze and his team have studied CDG with the ultimate goal of developing a treatment. When Freeze heard from Sara, he recommended that she talk to her doctor about giving Baraa mannose, a nutritional supplement.

Years ago Freeze helped discover that mannose can treat one specific form of CDG—incredibly reversing symptoms as quickly as days sometimes (note: Freeze is not a medical doctor). But it only works if a person has one kind of mutation; treatments are still limited for the 129 other types of CDG that exist. Freeze reasoned that even if he didn’t have Baraa’s genetic sequence in hand, if the boy had that mutation, the mannose would work.

Incredibly, it did. Within a month, Baraa’s energy was back. And today, Baraa is a Flash-loving, book-devouring little boy who loves to run and sing.

Baraa was doing so well that Sara even decided to take a vacation for the first time in years. She and Baraa traveled from their home in Egypt to visit her brother in Irvine, California—which happened to be a short drive from SBP. Sara reached out to Freeze, whom she calls “the man who saved my son’s life,” to see if a visit was possible. Freeze was delighted to meet with her and Baraa and give them a tour of his lab.