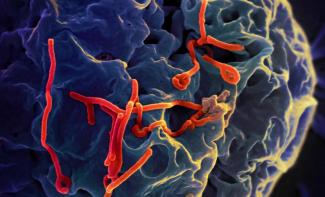 Ebola’s reputation as a killer virus is well deserved—the most recent outbreak, in West Africa from 2014-2016, caused more than 11,000 deaths among 28,000 infections, according to the World Health Organization. Outbreaks have occurred regularly since 1976, so another is likely, but the timing is hard to predict. While an effective vaccine against the virus has been developed and will likely be approved, there are no drugs available to treat Ebola infections.

Ebola is not just deadly. It also causes an awful disease—sudden fever, fatigue, muscle pain, and headache that last for days, followed by vomiting and diarrhea that lead to severe dehydration, requiring IV fluids. Many Ebola patients also bleed internally and externally, from IV insertion sites, the nose and eyes.

A new $4.1 million grant from the National Institute of Allergy and Infectious Diseases supports research to find compounds that block the growth of Ebola virus, which could lead to new antiviral drugs. Sumit Chanda, Ph.D., professor and director of the Immunity and Pathogenesis Program at Sanford Burnham Prebys Medical Discovery Institute (SBP), and Anthony Pinkerton, Ph.D., director of medicinal chemistry at SBP’s Conrad Prebys Center for Chemical Genomics, are collaborators on the effort. Christopher Basler, Ph.D., professor and director of the Center for Microbial Pathogenesis at Georgia State University, is directing the project.

“Drugs for Ebola are still urgently needed,” says Chanda. “Even with a vaccine, there’s still the possibility that someone who hasn’t been vaccinated might be exposed and carry it to an area where it’s not endemic.”

The SBP investigators will not be working with the disease-causing Ebola virus itself. Instead, they’ll be using non-infectious components, avoiding the need for special containment facilities.

The scientific team, which also includes Megan Shaw, Ph.D., associate professor at the Icahn School of Medicine at Mount Sinai, and Robert Davey, Ph.D., scientist at Texas Biomedical Research Institute, will first identify inhibitors of the viral machinery. Later phases of the project will confirm efficacy against live Ebola virus, determine how the drug candidates block the viral machinery and develop additional tests to identify drug candidates that will inhibit not only Ebola virus, but also the related Marburg virus.

"Marburg is also highly lethal,” says Pinkerton. “Drugs that work against the whole virus family would provide an even greater benefit to public health.”

This story was based in part on a press release from Georgia State University.