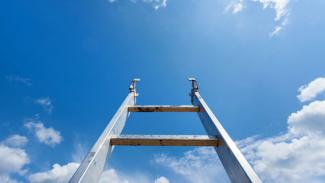 “The STRIVE award is providing funds that allow us to accelerate the testing of a new hypothesis that connects the microbiome, epigenetics, and colorectal cancer.”

--Alex Strongin, Ph.D. professor in the Bioinformatics and Structural Biology Program at SBP.

Every new medicine starts with an idea, and SBP has a new program, STRIVE, to help scientists put those ideas into practice. STRIVE provides faculty, postdoctoral fellows, and graduate students with specialized knowledge, resources, and mentorship to put creative concepts into practice. The program solicits proposals based on new information about a disease, linking disparate observations in a unique way, novel applications of technology, and/or new discoveries in medicinal science.

Many congratulations to the scientists with recent winning proposals!

Aman Mann, Ph.D. Developing a peptide for early detection of Alzheimer’s disease One of the reasons why recent clinical trials of various drugs for Alzheimer’s disease (AD) have failed may be attributed to treating the disease too late. Early detection of AD may lead to therapeutic interventions that are potentially more beneficial. Mann’s STRIVE proposal extends his recent identification of a peptide called “DAG” that recognizes cells from AD patients but not normal individuals. He will develop a targeted imaging probe using DAG to image AD lesions at a pre-symptomatic stage that could have a significant impact on early diagnosis and intervention for AD.

Fraydoon Rastinejad, Ph.D. Finding drugs to treat tumors by cutting of their supply of oxygen and nutrients When solid tumors outgrow their blood supply and become starved for oxygen and nutrients, Hypoxia-inducible factors (HIFs) turn on genes that promote cancer survival pathways. Rastinejad recently solved the protein structure of HIFs, revealing five “pockets” where drugs could bind and inhibit their function. This approved project will screen for small molecules that selectively bind these HIF pockets. Finding these molecules will improve the chances of NIH funding and open the door for pharmaceutical collaborations for HIF inhibitors to treat cancer.

Jessica Von Recum, Ph.D. Discovery of novel drugs against influenza A viruses in a human ex vivo lung model Influenza (the flu) can cause serious complications in immunocompromised individuals and people with underlying chronic diseases. Despite significant research, there is still a large unmet clinical need for effective therapies, mainly due to increasing resistance against available drugs.  Von Recum’s project will use ex vivo human lung tissue to screen for novel antiviral compounds.  In contrast to cell lines and non-lung primary cells, healthy human lung tissue has the advantage of possessing all human host factors that the virus needs for its efficient replication, including cellular proteases, an emerging target for influenza therapy.

Zoltan Simandi, Ph.D. Establishing a new therapeutic target for ALS The cause of more than 90 percent of amyotrophic lateral sclerosis (ALS) cases, more commonly referred to as Lou Gehrig’s disease, is unknown. The disease is a progressive neurodegenerative disorder with no cure.  Simandi’s project will examine the role of two post-translational enzymes called protein arginine methyltransferases (PRMTs)—proteins that have been implicated in their preliminary studies of the pathogenesis of ALS. He will generate mice without PRMT1 and PRMT8 genes and measure the impact on disease progression. His research may establish PRMTs as new targets to treat ALS.

Charles Spruck, Ph.D. Arresting the growth of tumors Cellular senescence is the cessation of cell growth, and is a vital mechanism that can constrain the malignant progress of tumors. Exploiting senescence is a novel approach to finding new cancer drugs. Spruck’s winning proposal is designed to screen for inhibitors of a little known ubiquitin ligase, called SCFFbxo44. SCFFbxo44 inhibitors could be the first pro-senescence therapy for a wide range of cancers. Spruck previously identified as SCFFbxo44 as a key component of maintaining an anti-senescent state. The goal of the project is to generate sufficient preliminary data to apply for an NIH grant to support large-scale, high-throughput screening.

Alex Strongin, Ph.D. Epigenetics at the host-pathogen interface Cancer originates as a result of the accumulation of genetic and epigenetic abnormalities in the genome. In colorectal cancer, aberrant DNA methylation precedes genetic mutations and is a key step in cancer onset. Strongin’s STRIVE project will test the hypothesis that mycoplasma—a parasitic pathogen—may serve as delivery vehicle for methyltransferases enzymes that aberrantly methylate the human genome. By introducing a specific DNA sequence as “methylation bait” into normal cells, they will then measure the extent to which pathogenic mycoplasma methylates the human genome. The findings may ultimately lead to the identification of genes and cell pathways that undergo epigenetic changes which lead to cancer.