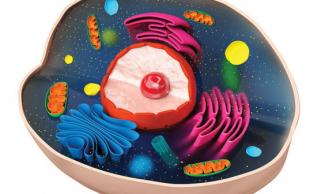 This post was written by Janelle Weaver, Ph.D., a freelance writer.

When cells are faced with unfavorable environmental conditions, such as limited nutrient availability, the activation of adaptive stress responses can help protect them against damage or death. For example, stressed cells can maintain sufficient energy levels for survival by degrading and recycling unnecessary or dysfunctional cellular components. This survival mechanism, known as autophagy (literally, ‘self-digestion’), also plays key roles in a variety of biological processes such as development and aging, and is often perturbed in various diseases. Even though tight control of autophagy is key to survival, relatively little is known about the signaling molecules that regulate this essential process.

Sanford-Burnham researchers have made important progress in addressing this gap in knowledge by discovering that proteins called STK3 and STK4 regulate autophagy across diverse species. As reported recently in Molecular Cell, the newly identified mode of autophagy regulation could potentially have important clinical implications for the treatment of a broad range of diseases, including cancer, diabetes, Alzheimer’s disease, cardiac dysfunction, and immune-related diseases.

“Our discovery is fundamental to our molecular understanding of how autophagy is regulated,” said senior study author Malene Hansen, Ph.D., associate professor of the Development, Aging, and Regeneration Program at Sanford-Burnham. “Because impairment in the autophagy process has been linked to many disorders in humans, we believe that pharmacological agents targeting this novel regulatory circuit may hold great therapeutic potential.”

Autophagy is a cellular recycling process involving a highly intricate and complex series of events. Cellular components such as abnormal molecules or damaged organelles are first sequestered within vesicles known as autophagosomes. These vesicles then fuse with organelles called lysosomes, which contain enzymes that break down various molecules. This fusion process results in the formation of hybrid organelles called autolysosomes, where the defective cellular components are enzymatically degraded and recycled. A protein called LC3 plays crucial roles in the formation of autophagosomes and the recruitment of dysfunctional cellular components to these vesicles. The signaling events that coordinate LC3’s various functions in autophagy have not been clear, but new research from the Hansen lab now proposes a novel and essential role for the mammalian Hippo kinases STK3 and STK4 in regulating autophagy by targeting LC3 for phosphorylation.

Previous studies have shown that STK4 also plays a role in regulating antibacterial and antiviral immunity in mammals, including humans. Moreover, autophagy is known to play a role in the clearance of intracellular pathogens. “These findings, taken together with our discovery that deficiency in STK3 and STK4 severely compromises autophagy, led us to test whether STK4 also plays a role in antimicrobial immunity through its function in autophagy,” said lead study author Deepti Wilkinson, Ph.D., a postdoctoral fellow in Hansen’s lab.

To test this notion, the researchers collaborated with Victor Nizet M.D., professor of Pediatrics and Pharmacy  at UC San Diego and found that indeed mouse embryonic cells deficient in both STK3 and STK4 were unable to efficiently kill intracellular group A streptococci—bacteria known to be cleared by autophagy. However, an LC3 mutation that resulted in constant phosphorylation at threonine 50 restored the ability of the STK3/STK4-deficient cells to kill the bacteria. “This finding suggests that the same STK4-LC3 signaling pathway involved in autophagy also contributes to the response of mammalian cells to infection with intracellular pathogens and could play a role in human immune-related disease,” Wilkinson said.

Moving forward, the researchers plan to further probe the molecular mechanisms by which STK3 and STK4 regulate autophagy. They will also investigate the therapeutic implications of the STK3/STK4 signaling pathway for tumor suppression as well as immune-related disorders such as bacterial and viral infections. “Understanding how autophagy works and why it sometimes stops to function optimally is essential for fighting diseases such as cancer, diabetes and neurodegeneration,” Hansen said.

“We have made a major contribution towards this endeavor by showing that STK3 and STK4 play an essential role in keeping the process of autophagy running smoothly by directly phosphorylating the key autophagy protein LC3. We hope our discoveries will lead to the development of effective drugs that can help correct autophagy defects that commonly occur in these diseases,” added Hansen.