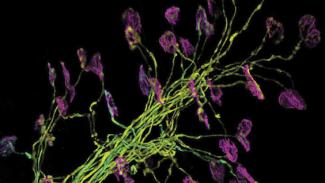 The discovery that a protein called membralin promotes the survival of motor neurons could potentially lead to novel therapies for severe, early-onset motor neuron disease, according to a recent study by SBP investigators. As reported recently in eLife, the researchers developed a novel mouse model for identifying therapeutic targets for a class of motor neuron disorders called distal hereditary motor neuropathies.

These diverse genetic diseases cause the loss of motor neurons in the spinal cord, resulting in muscle atrophy and progressive weakness in body parts such as the limbs, extremities, and vocal cords. Severe, early-onset cases can cause respiratory failure and death in infants. The underlying mutations have not been identified in most cases, and currently there is no cure or effective treatment.

“Our studies open a new avenue for research in the field of human motor neuron diseases,” said senior study author Dongxian Zhang, Ph.D., associate professor in the Degenerative Diseases Program at SBP. “Ultimately, this research could pave the way for the development of effective treatments for preventing the death of motor neurons and prolonging patient survival.”

Stressed cells Motor neuron diseases are neurological disorders that gradually destroy cells that control essential voluntary muscle activity such as speaking, walking, breathing, and swallowing. Past research by Zhang and others has suggested that cell stress may contribute to certain motor neuron diseases. It is thought that the unusually heavy metabolic demand of motor neurons puts strain on a cell structure called the endoplasmic reticulum (ER), which plays a crucial role in protein folding, synthesis, and transport. Too much ER stress, which is triggered by the accumulation of unfolded proteins, can lead to cell death in neurodegenerative diseases.

In the new study, Zhang and his collaborators discovered that membralin, whose function was previously unknown, protects motor neurons from death caused by ER stress. Mice lacking this ER protein died within six days after birth due to respiratory failure caused by the severe loss of motor neurons innervating the limbs and diaphragm. Moreover, the researchers found signs of ER stress in motor neurons taken from the spinal cord of these mice. Consistent with this finding, additional experiments revealed that membralin directly interacts with another ER protein called Erlin2, which has a known role in degrading unfolded proteins and thereby protecting against ER stress.

Taken together, the findings suggest that membralin may assist Erlin2 in the degradation of unfolded proteins. “Future elucidation of the exact role of membralin in this process will undoubtedly be important for understanding the contribution of ER stress to motor neuron diseases,” Zhang says.

Therapeutic targets This line of research holds promise, Zhang says, because drugs that inhibit ER stress are effective at delaying the onset of motor neuron diseases and prolonging survival in animal models. “Past studies have suggested that molecules related to ER stress may represent rational drug targets for motor neuron diseases,” he says. “Our next step is to further examine how membralin promotes healthy ER function and protects against motor neuron death. Through this effort, we hope to identify novel drug targets that could improve clinical outcomes for patients suffering from severe, early-onset motor neuron disorders.”

This post was written by Janelle Weaver, Ph.D., a freelance science writer.