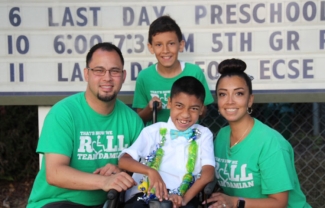 11-year-old Damian Omler is the only known individual with his CDG mutation.

Donnie and Gracie Omler are used to the question, “What’s wrong with your son?” Now, they don’t have to say, “We don’t know.”

While the Omlers knew that something was off when their son Damian started to miss his early milestones—he struggled to sit up, make “goo-goo” sounds and put weight on his legs—a decade passed before they had an official diagnosis.

Doctors suspected Damian had a congenital disorder of glycosylation, or CDG, but couldn’t confirm the mutation type. The family began attending Sanford Burnham Prebys’ Rare Disease Day Symposiums, but unanswered questions made them unsure of how they fit into the CDG community.

Now, the Omler family has answers. Hudson Freeze, Ph.D., and his team determined that Damian has a never-before-seen type of CDG, now named CDG-GET4. This gene codes for a chaperone protein that guides other proteins to where they need to be in a cell. Freeze’s team found that in Damian’s case, one of these chaperone proteins was almost completely gone.

The Omler family shared with KPBS how receiving answers changed their life.

“After the diagnosis we sat and smiled for a long time,” says Donnie. “Obviously we are not done. But answers give us hope. There might be a treatment or supplement for Damian. We might be able to predict possible complications in the future.”

Today, Donnie and Gracie focus on giving Damian a fulfilling life. He attends school, where he has friends and participates in sports. He plays with his 9-year-old brother, DJ. He loves rock music—and even attempted to strum a guitar recently. Donnie, a rock lover himself, clutches his heart with joy when describing this development.

Still, the Omlers recognize the challenges that Damian faces. He has seizures, needs help using the restroom and recently got a feeding tube. They attend the Institute’s symposiums to make sure they are up-to-date on information that might help Damian. They also fundraise as much as possible to help researchers do more.

“We are amazed at how much brainpower it takes to find a diagnosis, let alone treat the disease,” says Donnie. “There is no way we could have done this alone. Without these scientists, we would probably still be waiting for answers.”