One plant at a time: How Sanford Burnham Prebys is helping the monarch butterfly 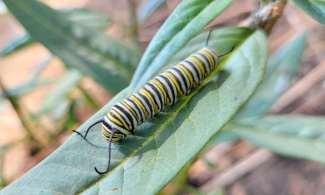 Monarch butterflies are in trouble, and we’re doing something about it

To help protect the monarch butterfly, which was recently declared endangered, Sanford Burnham Prebys is planting milkweed on campus. Planting milkweed and other butterfly-friendly flowers along monarch migration routes is a key strategy to support this iconic California species and prevent further decline.

“In the ’80s, we all took the butterflies for granted,” said Eva Engvall, Ph.D. professor emerita at Sanford Burnham Prebys. Professor Engvall’s comments on the decline of the monarch were immortalized several years ago in a printed mural on campus. “Thirty years later, we never see them.”

The International Union for the Conservation of Nature (IUCN) recently added the monarch butterfly (Danaus plexippus) to its list of endangered species. The distinctive orange-and-black butterflies are a staple of Californian wildlife, but their numbers have drastically declined over the last 30 years.

Although monarchs are known for their heroic migration to Mexico and back each year, those that live west of the Rocky Mountains need not travel so far—many of their overwintering sites are located right here in California, with others scattered throughout West Coast states.

In the 1980s, when Sanford Burnham Prebys was known as the La Jolla Cancer Research Foundation, some of these resting sites could be found on our campus. Today, this is no longer the case.

Habitat destruction from agriculture and urban development, along with declining milkweed populations caused by drought and fire, have decimated the butterfly population. The IUCN estimates that the population of West Coast monarch butterflies has fallen by an estimated 99.9% between the 1980s and 2021.

“For some time, I thought they didn’t come to La Jolla because the area had been so developed,” said Engvall. “But this is apparently not the cause of the reduction in the number of butterflies, but rather the lack of the plant milkweed, which the larvae need to feed on.”

To combat this problem, the Institute has planted several milkweed plants along our on-campus walkways. Milkweed plants provide shelter and a place to lay eggs for adult butterflies, and they are the only plants that monarch caterpillars eat. Dozens of monarchs have already been spotted on the milkweed just outside Building 1.

“They eat so fast that we may need to plant more at this rate,” says facilities director John Reed, who planted the milkweed last week.

The milkweed planting is the latest in a series of steps the Institute has taken to help protect the environment and promote sustainability. Sanford Burnham Prebys has been recognized as a trailblazer in water conservation for its innovative water-saving landscaping, and the Institute also recently completed a sweeping round of solar energy upgrades.

“It’s great that our Institute is able to do our part to protect the environment, including these beautiful monarch butterflies,” adds Reed.