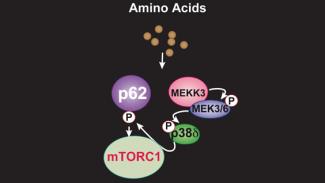 In a new study by SBP, researchers have identified a novel kinase cascade that regulates mTORC1, a protein complex implicated in the control of cancer cell growth in response to nutrients. The study, published in Cell Reports, provides further insight into the control of mTORC1 activation, and highlights several new potential drug targets to treat human pathologies linked to mTORC1 deregulation.

“We have found that the phosphorylation of p62, a protein in the mTORC1 complex, is a critical event required to activate mTORC1 in response to amino acids, an environmental cue that signals the presence of sufficient nutrients to ensure cell growth,” said Maria Diaz-Meco, Ph.D., senior author of the paper and professor in our Cell Death and Survival Networks Program. “Tight regulation of mTORC1 activation is critical for normal cell growth and homeostasis. When the process becomes uncoupled from nutritional status signals, it can promote the progression of multiple pathological processes.”

mTOR—what does it do? The mammalian target of rapamycin—a drug originally developed to prevent immunosuppression—is mTOR. mTOR is one of the most critical proteins in the control of cell proliferation, including cancer. For decades scientists have been researching mTOR to gain a thorough understanding of exactly how it regulates such an essential cell function that impacts metabolism, growth, protein and organelle recycling (autophagy), proliferation, and survival.

The mTOR gene produces one protein that forms two distinct complexes, mTORC1 and mTORC2. mTORC1 responds to nutrient availability and growth cues, and when activated (phosphorylated), leads to increased protein synthesis and cell proliferation. In contrast, mTORC2 appears only to respond to growth factors such as insulin, and is more important for overall cell survival.

mTOR as a pharmacological target The breadth and pathological conditions where mTOR is implicated have led to extensive efforts to develop inhibitors of this important kinase. Indeed there are now a handful of FDA approved mTOR inhibitors, mainly rapamycin and its analogues, available to treat certain cancers, organ transplantation, coronary restenosis, and rheumatoid arthritis. However, since many of the drugs are dual inhibitors of mTORC1 and mTORC2, and because mTORC2 is involved in the maintenance of cell survival, the drugs can give rise to unwanted, often life-threatening side effects. For this reason, scientists are intensifying their efforts to further understand the initiation and control of mTORC1 signaling to develop newer, more specific, less toxic drugs that exclusively target this pathway.

“Collectively, we have shown that MEKK3 is the leading kinase in an amino-acid sensing cascade that includes MEK3/6 and p38-delta, and drives p62 phosphorylation, which is a critical step for mTORC1 activation in response to nutrients,” said Jorge Moscat, Ph.D., co-author of the paper and associate director of Basic Research in our NCI-designated Cancer Center. “Each of these kinases, MEK3/6, p38-delta, and MEKK3, either on their own or in combination, represent a potential target that could selectively modulate mTORC1 activity without inhibiting mTORC2 to potentially treat many human diseases.”

How it works The research showed that p62 is phosphorylated via a cascade that includes three tandem kinases: MEKK3, MEK3/6 and p38-delta. The latter directly phosphorylates p62 when cancer cells sense that they have nutrients to grow. In turn, p62 orchestrates the binding of components to create the mTORC1 signaling complex.

The study included an analysis of MEKK3, p38-delta, and p62 in prostate cancer specimens, and found that levels of these proteins were more highly expressed in aggressive tumors with high Gleason scores (GS7-10), supporting the relevance of the findings in prostate tumorigenesis.

“Our study has not only identified p62 phosphorylation as the initiating signal, but elucidates the cascade of proteins and kinases involved,” said Diaz-Meco. “Importantly, since we know that kinases can be inhibited with small-molecules, our findings may lead to new drugs that exclusively target the mTORC1 activation pathway, potentially circumventing the unwanted side effects cause by drug interactions with mTORC2.

“We have already identified MEKK3 inhibitors and are working to develop these compounds in parallel with screening small-molecule libraries with the Conrad Prebys Center for Chemical Genomics for inhibitors of MEK3/6 and p38-delta.”