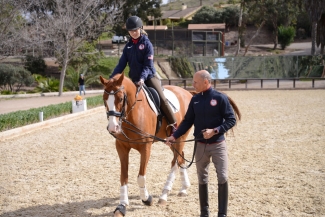 When Morgan Webb Liddle is riding a horse, it’s one of the only times she feels “free,” she says. “I was born to ride,” says Morgan, 25, who uses a wheelchair. Morgan and her mother Merell Liddle flew from Australia to attend SBP’s Rare Disease Day Symposium and Family Conference in February 2018.

During their trip to San Diego, Hudson Freeze, Ph.D., professor and director of SBP’s Human Genetics Program, arranged for Morgan to meet Olympic equestrian Steffen Peters. When they met, Morgan literally cried tears of joy. Freeze has been working with Morgan’s family to find a treatment for Morgan’s disease.

At Arroyo Del Mar Stables, Morgan received expert dressage coaching from Peters, who won a bronze medal in Rio de Janeiro. Morgan rode on a chestnut beauty named Bailarino, owned by Akiko Yamazaki, who gave Morgan special permission to ride her horse every day while she was attending the Rare Disease conference. Peters, impressed by Morgan’s riding, said, “What you do is much more amazing than what I do.”

Morgan suffers from CDG—which stands for congenital disorder of glycosylation—a disease that disrupts how the body’s sugar chains attach to proteins. Freeze is working on finding a cure for CDG. Liddle is one of the few adult CDG patients since many succumb to the potentially fatal effects of the metabolic disorder as children.

Her mother says, “Morgan has virtually no sense of balance. She does an amazing job just staying on the horse. She is currently working on new ways to ride because she has difficulty seeing the edges of the arena and the letter markers because of her poor peripheral vision.” Nevertheless, Morgan aims to compete in the Para-Olympics one day. Morgan has already won the Australian National Championship for Para-Dressage multiple times.

When Morgan was 14 years old, she was finally diagnosed for CDG after her physical and neurological condition began to worsen rapidly. Knowing the diagnosis was a huge relief for Morgan’s family since doctors were stumped by her illness. Freeze is one of the few experts in the world who helps diagnose and research treatments for CDG patients. “Hud has been amazing,” says Morgan’s mother.

“We share a special kinship,” says Freeze, who grew up with a disabled sister. “When I first met Morgan, she reminded me of my sister.”

For the symposium’s reception, Morgan performed a modern lyrical dance performance, while Freeze sang ABBA’s “I Have a Dream.” As the scientist and patient were preparing for their performance, Freeze said to Morgan, “We share a dream—to find a treatment for CDG.”