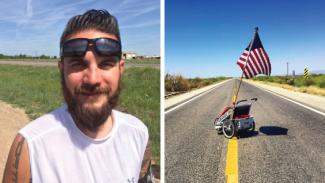 On Saturday, July 4, at 3 p.m., an extraordinary man named Noah Coughlan will complete a run—a solo run— that stretched more than 3,000 miles and 13 states. His journey will have lasted 127 days. Even more impressive is that this is the third time he has done it. Why on earth would someone take on such a feat?

Noah runs to rally support for the 30 million Americans affected by rare diseases. A disease or disorder is defined as rare in the United States when it affects fewer than 200,000 Americans at any given time. But if you put "rare" in context, these diseases are not so rare. Since there are more than 7,000 known rare diseases, 1 out of every 10 Americans has a rare disease.

Historically, the low numbers of people afflicted with any one rare disease means that funding and research has lagged. Noah is coming to bat for these people, 50 percent of whom are children.

Run for Rare: Every Life Matters Noah has created Run for Rare, an ongoing movement to bring awareness and rally support for the global rare-disease community. Inspired by two childhood friends who battled a rare brain disorder called Batten Disease, his efforts have had a profound impact on the awareness of rare diseases. His message has reached congressmen, governors, and mayors. Run for Rare has partnered with the National Organization of Rare Diseases, EveryLife Foundation for Rare Diseases, Global Genes, and many other supportive organizations.

If you would like to celebrate Noah’s arrival in San Diego, you can meet him at:

Where: The intersection of Santa Monica Avenue and Abbott Street in Ocean Beach, Calif. When: July 4, 2015, at 3 p.m. PST

SBP is a great supporter of Noah. He will be an advocate speaker at our 2016 Rare Disease Day Symposium in La Jolla, organized by Hudson Freeze, Ph.D., director of our Human Genetics Program, and on the Scientific and Medical Advisory Board of Global Genes.