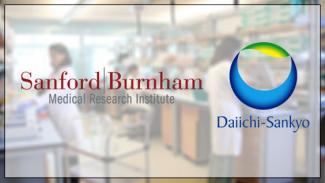 We're excited to announce that Sanford-Burnham has signed a licensing agreement with Daiichi Sankyo to further develop a first-in-class small molecule for the treatment of cardiovascular-metabolic disease. The small molecule is based on longstanding, groundbreaking biology work by one of our scientists and his laboratory team, who for decades focused their research on treating a consequence of cardiovascular-metabolic disease.

"The inhibitor is the product of a deliberate initiative at Sanford-Burnham to enable the process of translating basic research discoveries made by the Institute's researchers into novel therapeutics. This outcome is the first of a number of promising candidates that are emerging from our faculty’s fundamental research and progressing through our discovery pipeline," said Perry Nisen, M.D., Ph.D., CEO of Sanford-Burnham. "We are all very excited that Daiichi Sankyo is now working with us to accelerate the pace at which this drug candidate will move into the clinic."

The licensing agreement follows a strategic alliance between Sanford-Burnham and Daiichi Sankyo initiated last year. By working with us, scientists at Daiichi Sankyo are seeking continued and expanded access to our deep human biology insights and drug discovery technology, with the ultimate goal of advancing lead drugs toward clinical trials.

Sanford-Burnham's Conrad Prebys Center for Chemical Genomics (Prebys Center) played a key role in the development of the small molecule. The Prebys Center led the drug discovery effort, from assay development and chemical-library screening to a significant lead-optimization effort, which ultimately resulted in a highly selective, drug-like inhibitor. Prebys Center scientists also developed a biomarker assay that may be used to measure the efficacy; this test could help physicians optimize patient management.