SBP and friends remember Conrad Prebys with a touching tribute 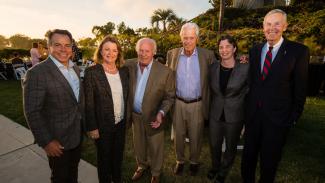 With the brilliant sun descending over the famed Torrey Pines Golf Course overlooking the Pacific Ocean, a close knit of friends and loved ones gathered to pay tribute to Conrad Prebys and his lasting impact on Sanford Burnham Prebys Medical Discovery Institute (SBP). It might’ve been the same kind of gorgeous sunset that inspired Prebys to put down roots in California after moving from Indiana with $500 in his pocket.

T. Denny Sanford and Malin Burnham came to the podium and spoke about the loss of their dear friend Conrad. Burnham spoke about how much he admired Conrad’s “gut” feeling, which inspired him to become a loyal supporter to the Institute. In 2015, SBP was the recipient of Prebys’ extraordinary philanthropic gift of $100 million.

SBP President Kristiina Vuori, M.D., Ph.D., recounted Conrad’s delightful visits and his longstanding relationship with the Institute. Michael Jackson, Ph.D., senior vice president of Drug Discovery and Development and head of the Conrad Prebys Center for Chemical Genomics, known as the Prebys Center, spoke highly about how impressed he was with Conrad’s intellectual curiosity and passion for science.

“Conrad’s generosity has enabled us to become a world-class facility, with the Prebys Center being recognized as one of the most comprehensive, nonprofit drug discovery centers in the world, conducting innovative drug discovery across all major disease areas – cancer, Alzheimer’s, Parkinson’s disease, heart failure, diabetes, autoimmune diseases, such as rheumatoid arthritis and Crohn’s disease,” said Dr. Jackson. In large part because of Conrad’s pivotal contribution, SBP is often chosen as a collaborative partner of choice among pharmaceutical companies, biotech companies, academic institutions and academic foundations all over the United States.

Debbie Turner also attended the tribute and enjoyed the walk down memory lane with Conrad and his relationship to SBP with a photo presentation of years past and a dedicated short video SBP produced celebrating Conrad's life.

Guests enjoyed an outdoor buffet reception, while mingling with scientists who attended SBP’s Annual Symposium earlier that day. Nearly 300 scientists from all over the world gathered to attend SBP’s annual conference, which was themed “Frontiers in Single Cell Biology.”

After the touching tribute that brought a few of the guests to tears, friends gathered for a light reception of dessert and coffee and said their “goodbyes” until the next SBP event.

Our Annual Gala will be held on Saturday, October 14 at Coasterra on Harbor Island in downtown San Diego. Tickets are available here: SBP's 2017 Annual Gala.