SBP helps students “worm” up to science at STEM Expo 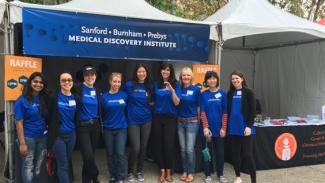 On Saturday, March 5, a keen group of SBP volunteers hauled wagons of lab coats, mutant worms and magnifying glasses to give the next generation of scientists—mainly kids in grades K-8—an opportunity to see first-hand how tiny worms named C. elegans are used to understand the aging process.

The Eighth Annual San Diego Festival of Science and Engineering Expo Day, held at Petco Park and sponsored by the Biocom Institute and Illumina, hosted more than 130 organizations with local ties that were willing to share cool science, technology, engineering and math (STEM)-themed exhibits with the goal of coaxing youngsters to consider pursuing a career in science. More than 25,000 people attended the incredible (free) event.

SBP did its part by sharing how many diseases, such as cancer, diabetes, and heart disease happen as people age, and that by studying genes (DNA) that change over time we can find ways to prevent and cure disease. The worms on display, called C. elegans, live a whopping 17 days on average making it easy to evaluate how changes in DNA can lead to disease.

Many congratulations to Malene Hansen, Ph.D., associate professor at SBP, whose lab supplied the concept (and the worms) for the exhibit, and to all the volunteers, who tirelessly wrapped kids in small lab coats and gave them encouragement to go forward and pursue a career that will ultimately make difference in the health and well-being of people around the world.