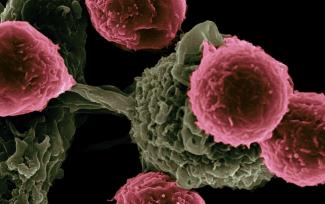 One of the most promising new approaches to treating cancer is immunotherapy—redirecting the immune system to detect and destroy tumor cells. That’s the topic of this year’s President’s Lecture by Andrew Weinberg, Ph.D., chief of the Laboratory of Basic Immunology at Providence Portland Medical Center, on 28 February 2017.

His research is related to the work of scientists at Sanford Burnham Prebys Medical Discovery Institute (SBP) working to harness the power of killer T cells that can recognize and eliminate cancerous cells.

The laboratory of Linda Bradley, Ph.D., professor at SBP, recently published a paper identifying PSGL-1, a protein that limits T cell responses to viruses, as a new target for checkpoint inhibition, an approach akin to taking the “brakes” off the immune system. They showed that T cells in mice that could not make PSGL-1 delayed tumor growth, suggesting that blocking PSGL-1’s function would help T cells fight tumors.

Conversely, Carl Ware, Ph.D., professor and director of the Infectious and Inflammatory Diseases Center, is developing an immunotherapy strategy that’s the equivalent of “hitting the gas” to expand anti-tumor responses. Their project exploits the protein LIGHT, which turns on multiple pathways required for strong T cell responses. Ware’s current goal is to create an optimized mutant form of LIGHT with the strongest ability to drive anti-tumor immunity.

Weinberg uses a similar “hitting the gas” approach to immunotherapy, targeting the T cell co-stimulator OX40 with a drug now in clinical trials.

Weinberg’s pioneering research revealed how OX40 identifies functional T cells in cancer and autoimmune disease patients. He confirmed the anti-tumor potential of OX40 in mice when antibodies that stimulated OX40 activity expanded the T cell population within tumors, and drove tumor regression. The identification of this anti-tumor potential ultimately led to the creation of the company AgonOx, which has commercially developed OX40 agonists in collaboration with AstraZeneca.

As clinical trials with OX40 agonists continue, Weinberg still recognizes the value of basic research. He says, “Understanding immunology in its most basic form can help us understand the principles and mechanisms involved with how these drugs work. If we understand how they work we can make them better, or choose combinations that will improve their efficacy.”