SBP Rare Disease Day Symposium: We can’t do it alone 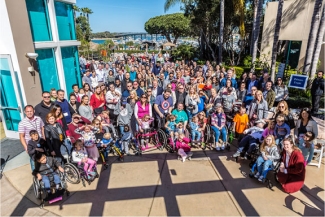 The 9th annual Rare Disease Day Symposium once again opened its doors to the global community with a genuine interest in CDG—rare inherited disorders that affect a mere 1,200 patients worldwide. The conference, a joint scientific and family symposium, attracted more than 175 attendees from North America, Europe and Australia—the largest ever in the history of the event.

Malin Burnham and T. Denny Sanford, honorary trustees of SBP, kicked off the three-day meeting by emphasizing that advances in medicine require participation and exchange among all stakeholders—scientists, physicians, affected patients and their families, support groups, granting agencies, industry, and philanthropists.

“This annual event brings these stakeholders together from around the world to share in each other’s successes and challenges and discuss the future of CDG research,” said Hudson Freeze, Ph.D., director of Human Genetics at SBP and Symposium Chair. “We have gained tremendous momentum, and are especially thankful for the participants who share their time and expertise.”

Children with CDG—which stands for congenital disorders of glycosylation—have varying degrees of speech and language difficulty, poor balance, motor control, vision problems, hearing impairments and seizures.  Because the condition is so rare, many patients bounce between doctors and clinics for years before they receive an accurate diagnosis.

“Being the parent of a child with an undiagnosed or rare disease can be a lonely place,” said Darlene Schopman, mother of Nolin, a 6-year old boy diagnosed with CDG.

“We thought we were the only people in the world affected by Nolin’s type of CDG. We’ve since learned that there are nine more children with his specific condition. And now at this conference I’m meeting other families that have had similar experiences—there is an immediate connection—a common bond.”

The scientific session began February 23 with a keynote presentation by Leroy Hood, M.D., Ph.D., president and co-founder of the Institute for Systems Biology. In all, 22 noted scientists and clinicians spoke on CDG research and future potential therapeutic avenues.

A highlight for families is the innovative “Doctor-is-in-session”, which directly connects families with medical researchers and clinicians in small groups. For medical researchers, the session is often their first opportunity to observe and interact with patients in person.

The conference was organized and run by SBP, members of CDG CARE (Community Alliance and Resource Exchange) and the nonprofit corporation NGLY.1.

The event was funded by donations, grants, and corporate and industry sponsorships, including support from Retrophin, a biopharmaceutical company focused on the discovery and development of drugs for the treatment of catastrophic diseases that are debilitating and often life-threatening, and for which there are currently limited patient options.