Soft bone disease research — from bench to bedside and back 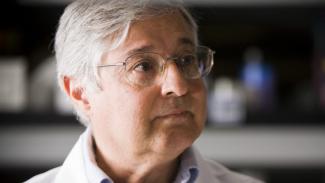 Funding for the laboratory of José Luis Millán, Ph.D., professor in the Human Genetics Program, has been renewed by the NIH to the tune of $3 million over the next five years. The grant ensures that they can continue to advance understanding of and develop treatments for the rare disease called hypophosphatasia (HPP). This disease—also known as soft bones—can cause skeletal deformities of the limbs and chest and result in frequent fractures and premature loss of teeth. HPP is estimated to affect approximately one per 100,000 live births.

The Millán lab’s decades of research have already led to the first-ever treatment, asfotase alfa, an enzyme that’s injected three to six times per week to help harden bones. This drug is a functional version of the enzyme that’s defective or missing in HPP patients, tissue-nonspecific alkaline phosphatase, that is modified to help it reach mineralizing tissues such as bone. Asfotase alfa is manufactured by Alexion Pharmaceuticals and was approved by the FDA last year.

The new therapy has transformed the lives of patients who received it as part of the clinical trial. For example, San Diego’s own Morgan Fischer couldn’t walk before receiving it, but she has since started skiing, riding ponies, and joined a kids’ baseball team.

“It is a rare privilege for a basic research scientist like myself to be able to translate our laboratory work to the clinic and impact patients’ lives,” said Millán. “It’s been extremely rewarding to see how much this treatment has helped these children, and now also adults, afflicted by this genetic disorder.”

“But our work is not done.”

With their current NIH support, Millán’s research group will address asfotase alfa’s limitations. For one, it doesn’t prevent premature fusion of skull bones, which means that many patients still need surgery to allow the brain to grow properly. Investigating other factors regulating skull development could identify targets for future drugs that could be used in combination with enzyme replacement.

Another potential problem with asfotase alfa is that it may contribute to hardening of the arteries in adults. This may result from the way the enzyme is modified, which could also lead to accumulation in arteries. The researchers will examine whether alternative forms of the enzyme can lessen this effect.

“While our earlier research went from the bench to the bedside, now we’re taking what we’ve learned from patients back to the bench. Hopefully, our studies will lead to insights that allow hypophosphatasia patients to live long, healthy lives,” Millán added.