Taking out a microRNA to thwart melanoma 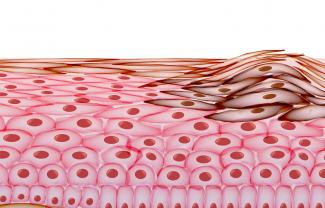 Melanoma is a deadly disease with limited treatment options. However, even when those therapies are initially successful, the cancer often comes back. Researchers continue to hunt for new approaches to make the disease more vulnerable.

Ranjan Perera, Ph.D., an adjunct professor at SBP’s Lake Nona campus, has been studying melanoma for many years, looking for mechanisms that can help control the disease. These efforts helped his lab discover miR-211, a molecule found in melanocytes, the cells that sometimes go awry and become cancerous. Not surprisingly, miR-211 is sometimes overexpressed in melanoma.

Because miR-211 is a microRNA—a small molecule that interferes with the cellular machinery that produces proteins—it can have a big impact on gene expression, and the gene it impacts is pretty interesting.

“MicroRNA-211 is targeted to a gene called PDK4, which is important for mitochondrial energy metabolism,” says Perera.

Scientists have known for more than 100 years that tumors restructure their metabolisms to compensate for their out-of-control growth. If miR-211 is part of that process, taking it out could make cancer cells more treatable.

To better understand what miR-211 is doing, researchers in Perera’s lab used CRISPR/Cas9 gene editing tools to eliminate it from cancer cell lines. They found that removing the molecule impacted mitochondria, the cells’ energy plants, and made them metabolically vulnerable. In addition, miR-211 loss dampened pathways that drive melanoma growth—so there was a double benefit. In animal models, cells without miR-211 had trouble forming tumors. These results were recently published in the Journal of Investigative Dermatology.

Perera and colleagues were also curious whether removing the microRNA might affect how cancer cells respond to the drug Vemurafenib—a therapy used for the treatment of late-stage melanoma. While the drug is effective in certain patients, tumors often develop resistance after several months. Further study showed that eliminating miR-211 made the melanoma cells much more sensitive to Vemurafenib.

These findings add to the body of evidence that helped Perera and SBP get a patent covering approaches using miR-211 to detect and treat melanoma. Perera’s team will continue to study this molecule, as well as the genes it impacts, to gain more insights and potentially transform these findings into new melanoma diagnostics and treatments.

“Given that miR-211 loss has a dual anti-cancer effect, by inhibiting both critical growth-promoting cell signaling pathways and rendering cells metabolically vulnerable, it is an extremely attractive candidate for combinatorial therapeutics,” says Perera. “This is especially true if, like here, miR-211 is upregulated in Vemurafenib-resistant melanomas in the clinic, since it provides both a highly specific target.”