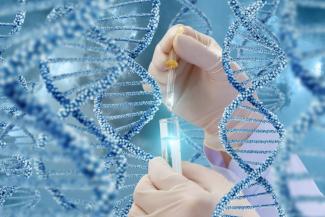 The parents of a child with seizures, weak muscles, limited communication abilities and autism-like behavior problems recently got a long-awaited answer as to the cause of her disorder. Researchers at Sanford Burnham Prebys Medical Discovery Institute (SBP) identified the genetic variants causing this now 12-year-old girl’s neurological issues.

“One of the many tests performed by the specialists treating her suggested that her symptoms might stem from problems with the addition of sugars to proteins,” says Hudson Freeze, Ph.D. “That’s why they came to us. There are lots of ways that the protein modification process—called glycosylation—can go wrong. We specialize in figuring out precisely which gene is responsible for an individual patient’s disease, using sequencing and measurements of cellular activities.”

Publishing in the American Journal of Medical Genetics, Freeze’s team showed that the patient carries variant sequences in both copies of a gene called SLC35A1, which encodes a protein that transports a specific sugar into the part of the cell where it’s used to modify proteins.

“She inherited two different mutations in the same gene from each of her parents,” says Bobby Ng, research assistant in the Freeze lab and lead author of the study. “Those mutations prevent the transporter protein from working, so that a crucial sugar—sialic acid—is missing from the ends of the sugar chains on many proteins located on the surface of cells.”

“Sialic acid is critically important for the function of a protein called NCAM that’s needed for the brain to develop properly,” Ng adds. “We think that’s why this patient’s problems are mostly neurological.”

This is only the third reported case of disease caused by mutations in the SLC35A1 gene. Ng, Freeze, and their collaborators had to devise entirely new assays to confirm that the mutations impaired transport of sialic acid and its attachment to proteins.

These three cases make up one class of a broader group of disorders known as CDGs, for congenital disorders of glycosylation. All CDGs are rare, but Freeze nonetheless believes strongly in the value of understanding them.

“CDGs may not be common, but many of them are extremely severe, affecting development and the function of multiple organs,” he says. “For the families whose children have a CDG, they’re the most important diseases in the world. And the only way we’ll ever find specific treatments that address their root causes is by investigating the pathology of each one.”