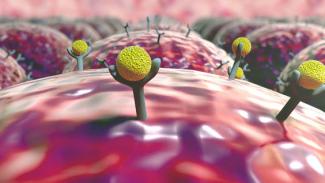 In a new study published in ACS Chemical Biology, Sanford-Burnham's Stefan Riedl and Elena Pasquale created a molecule with an improved ability to block the activation of a cell receptor called EphA4. When EphA4 is activated, it can hinder the ability of neurons to repair themselves and exacerbates certain degenerative processes, such as amyotrophic lateral sclerosis (ALS)—often referred to as Lou Gehrig’s Disease; Alzheimer’s disease; and stroke. The molecule is a cyclic peptide that represents a promising therapeutic lead for targeting neurodegenerative diseases and some cancers.

“We have significantly improved upon the molecular strategies previously available to block EphA4 activation,” said Riedl. “We have developed a cyclic peptide that binds to the EphA4 receptor almost 40 times better than the previous best inhibitor, making it by far the most potent agent targeting EphA4 currently available. Our findings support the use of cyclic peptides as a new generation of EphA4 inhibitors that have neuroprotective and cancer-fighting effects.”

EphA4 is a protein receptor found on the surfaces of many types of human cells and plays a role in a wide range of biological processes. Part of the receptor is on the outside of the cell and binds ephrin ligand molecules. When this happens, EphA4 triggers a cascade of events inside the cell that direct it to move or extend protrusions in specific directions, an important role in the development of the nervous system. But when dysregulated, EphA4 can contribute to the progression of neurodegenerative diseases and even thwart efforts of the nervous system to repair itself—such as in spinal cord injury. EphA4 has also been implicated in various types of cancer, including leukemia, breast, prostate, pancreatic, gastric, and liver cancer. Previous attempts to identify peptides that could specifically block ephrin binding to EphA4 yielded a few peptides, most of them linear. But because these peptides were not very potent, they were not ideally suited for therapeutic development.

“The ephrin pocket of the EphA4 receptor is very broad, and cyclic peptides are well suited to fill the wide cavity,” said Pasquale. “And because they are circular, they can exhibit more favorable properties, such as higher binding affinity and metabolic stability. We took the cyclic peptide called APY and analyzed its crystal structure when bound to the EphA4 receptor. This identified specific amino acids that could be modified to improve potency,” said Pasquale. “Our next step is to optimize the cyclic APY molecule to further improve potency and other properties such as its resistance to degradation and in-vivo lifetime,” added Pasquale.

Stefan Riedl, Ph.D., is associate professor of in the Cell Death and Survival Networks Program, and Elena Pasquale, Ph.D., is professor in the Tumor Initiation and Maintenance Program. The study was performed in collaboration with the Department of Chemistry and Cell Molecular Biology, The Scripps Research Institute.