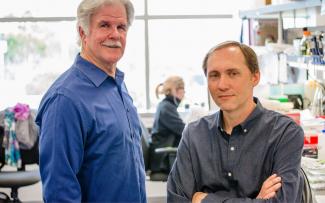 In the U.S. alone, 24 million people, or eight percent of the population, have autoimmune diseases such as rheumatoid arthritis, lupus, multiple sclerosis, and psoriasis. Current treatments, including the new wave of biologic therapies, don’t work for all patients so effective new drugs are still desperately needed. Scientists at Sanford Burnham Prebys Medical Discovery Institute (SBP), publishing in the Journal of Biological Chemistry, may have found a way to make one by studying viral infections.

“Viruses find ways of turning off immune responses so they can avoid being recognized and attacked,” explains John Šedý, Ph.D., research assistant professor at SBP and lead author of the study. “We looked at the proteins that herpes viruses use to turn down the immune system to figure out how to make a new drug to treat autoimmune disorders.”

“There is a substantial need for new therapies that can utilize the natural “brakes” of the immune system to turndown the immune system when it gets out of control, explains Carl Ware, Ph.D., professor and director of the Infectious and Inflammatory Diseases Center at SBP and the senior author of the research. “It has been difficult to design a molecule that turns a checkpoint receptor on, so we’ve sidestepped that hurdle by taking inspiration from biology.”

“HVEM itself won’t work very well as a BTLA-activating drug because it has other important immune regulatory responsibilities, so the side effects could be serious. Looking closely at the structure of a mimic—an HVEM-like protein in a virus—allowed us a way to make it selectively bind to BTLA,” explains Ware.

“Our study provides preliminary evidence that we can modify HVEM in a way that may be a starting point for an autoimmune disease drug,” adds Ware. “This version of HVEM inhibits a signaling process in B cells that has been shown to be essential for driving autoimmunity.”

“Right now we are continuing with our structural analysis of HVEM to design versions that will advance our preclinical studies,” says Ware. “Our goal is to develop an entirely new class of therapies for autoimmune diseases like inflammatory bowel disease and systemic lupus, and other conditions caused by too much inflammation,” says Ware.

Congratulations to Drs. Ware and Sedy! This paper has been viewed more that 250 times on the JBC website.