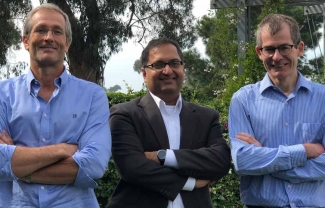 The event organizers are pictured from left to right: Lorenzo Puri, Ani Deshpande and Peter Adams

DNA contains more information than scientists previously thought. A booming field of research called epigenetics is uncovering DNA alterations that affect whether genes are turned on or off—without changing a single base pair.

These epigenetic changes may be physical, such as winding or unwinding DNA to change its accessibility—akin to opening or closing a door. Other changes can be chemical, such as adding molecular tags that turn genes on or off—like a highlighter calling out special text to a reader.

On October 29, 2018, more than 300 scientists gathered at SBP’s 39th Annual Symposium to hear the latest connections between epigenetics and development, aging, and diseases such as cancer. Researchers are particularly interested in this field because modifying epigenetic changes could be easier than editing the body’s underlying genetic code—and advances are leading to new medicines.

After a welcome by SBP’s President Kristiina Vuori, M.D., Ph.D., talks commenced on topics ranging from the role of epigenetics in prostate cancer, development of the heart and aging. Unpublished work was frequently presented, meaning that attendees received the most up-to-date results available.

A full list of speakers is listed below. To read more insights, follow #SBPsymposium on Twitter. And be sure to look out for next year’s symposium, which will focus on neurodegenerative diseases.